Sat next to host Susanna Reid, Ben was enjoying the theatrics as another news reporter sat on the sofa at the side of the studio keeping a meticulous eye on royal baby watch.

It was discussed whether or not Prince Harry and Meghan, the Duke and Duchess of Sussex, would announce the news of their baby’s birth on their new Instagram page, prompting excitement and furious checking on their news feed.

Yet in one moment when the show came back from its scheduled advert break, Ben started to mislead viewers.

Alarmed by Ben’s comments, Susanna, 48, proceeded to tell off her co-star on live television.

“No don’t tease people like that!” Susanna cried unhappily.

“Well I just saw Chris [reporter] on his phone,” Ben fumbled, seeming to immediately regret his choice of words.

The reporter broke the news seriously: “There’s been a rehearsal of trooping the colour at Windsor palace.”

Ben and Susanna instantly began to laugh as the reality dawned the news wasn’t anything to do with baby Sussex, and the former shrugged over his accidental blunder. 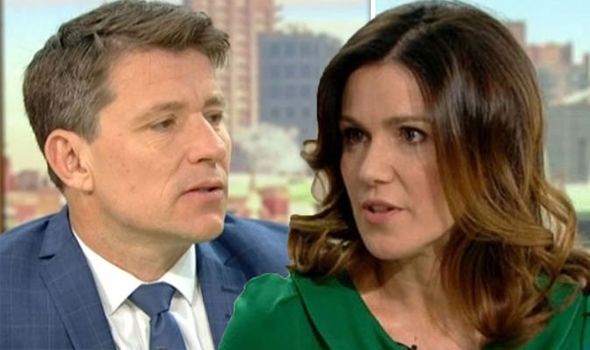 Yesterday’s programme saw Piers, 53, enter into an almighty rant over Instagram’s decision to trial a version of their app with the number on likes on each photo hidden.

In a debate with mental health campaigner Danny Bowman, Piers claimed it was ruining the “fun” of social media.

“And I think in the pursuit of trying to get that validation it can sometimes harm your mental health and also make you feel quite down, but in addition it can lead to body image difficulties as well.

“If people are commenting nasty things on your Instagram…”

Becoming angrier over the issue, Piers cut in: “Hold on you’re conflating two things here right, negative comments I think are an issue for concern,” he said. “I don’t like people being bullied through comments on Instagram or any kind of social media.

“I think that’s unacceptable, I don’t like the way that Instagram has allowed self harming images to be posted and so on, think that’s very bad. Those are different issues.

“But on the issue of likes, this comes back to me, to this ridiculous way we’ve gone in Britain and other countries it’s very American actually, but we’ve gone this way in Britain where any sense of competition has been abandoned for young people because they can’t deal with losing.”

“Instagram’s not a sport!” Piers’ co-host Susanna cried, frustrated with her co-host’s comments one the show.

Good Morning Britain continues tomorrow at 6am on ITV.