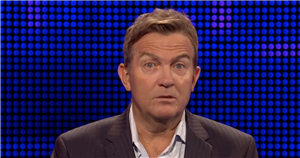 The Chase contestant Deb unexpectedly revealed that she fancies on of the Chasers on the ITV game show.

Host Bradley Walsh welcomed four more hopefuls up to the podium as they tried their hands at the general knowledge quiz.

Deb was first up and whizzed through her cash builder, but was scolded afterwards by Bradley as she called her attempt "rubbish".

He asked her whether she had said "rubbish," to which she agreed.

Walsh told the contestant that she had amassed "five grand," which made her "a very good player to start the team off".

He then asked her which Chaser she would like to go up against and Deb replied: "I'd quite like to take on Shaun, the Dark Destroyer, because I have to admit I have a little bit of a crush on him!"

A surprised Bradley responded: "But he's such a misery guts!"

He then welcomed the Chaser onto the show and a disappointed Deb was met with Paul "Sinner Man" Sinha.

Despite her disappointment, Deb remained in high spirits and greeted Paul as he sat down for the first round of the episode.

After he laid his offers out on the table, Deb divulged to Bradley that her daughter had urged her to "take the high offer".

Bradley then addressed the camera and jokingly told her daughter that she "isn't there," but Deb took the advice and went high.

A stunned Walsh congratulated her on her bravery and the trio set off into the head to head round.

However, Deb was quickly caught by Paul Sinha but he and Bradley clearly admired her guts and gave their commiserations.

Paul, Bradley and Shaun's co-star Anne Hegarty has landed herself another television job away from the ITV game show.

Anne, known as The Governess, is set to play "the only sane" character in a new sitcom.

She will take on the role of a housekeeper in Gammon, created by Adam Bostock-Smith, who also writes for The Chase.

Fans can expect to see Anne delivering some "funny lines" as she "loves comedy so much".

Away from the show, Anne has previously taken part in pantomimes and other acting roles.