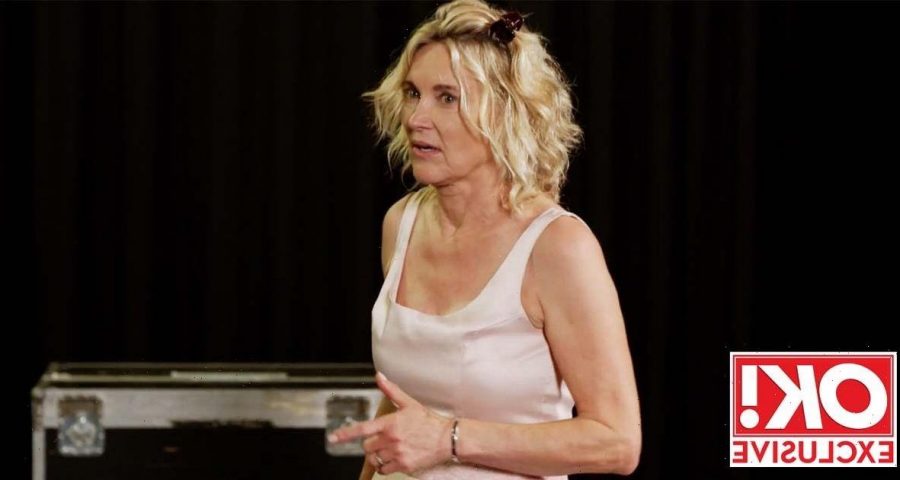 James ‘Arg’ Argent and Anthea Turner have been having the time of their lives on E4 reality series The Real Dirty Dancing.

But as the duo rehearse for their final performance where they’ll take on the iconic gravity-defying lift from the film, things begin to fall apart as OK!’s exclusive, first-look clip shows.

Anthea, 61, is feeling the nerves ahead of the big final, as she’s asked to practise running towards 34 year old Arg so that he can lift her up in the show stopping move.

And it seems she has every reason to be worried when former The Only Way is Essex star Arg struggles to master the move – almost dropping Anthea in the process.

As rehearsals for the grand final begin, Anthea is dressed in a pink dress, just like Jennifer Grey’s Baby from the film.

As Arg gets ready to try out the move, aided by two of the show's male stars, the choreographer tells the pair to look at each other and stay focused.

But when the former GMTV host runs towards Arg, he loses his footing and struggles with his balance, leaving her to slip down his body and land on the floor, instead of floating in the air effortlessly.

As the team shout at Arg to “get lower” to the ground so he can drive his momentum through, he realises his big mistake.

He then shares his frustrations, swearing under his breath as he says he needs to “get this man.”

With Arg floundering, Anthea suggests she practices with the choreography team instead so she can “get the feeling.”

Arg responds, asking her directly: “Why don’t you feel it when I do it?”

While the team are quick to comment on the growing tension that’s palpable for all to see, saying: “I can see the nerves, especially from Anthea, and that’s not usually the case.”

Will Anthea and Arg be able to get it together on the night to win the battle and be crowned the winner’s of the series?

This comes after the reality star admitted to having a huge crush on Anthea, describing her as “a fine wine.”

After the pair came face to face on the show, hosted by Keith Lemon and Ashley Roberts, Arg confided in the boys that he couldn’t help but have a crush on the star and wanted to be partnered up with her for the competition.

Speaking to the male line-up, which included Blue’s Lee Ryan and former Gogglebox star Tom Malone Jr, Arg said: “I'm not going to lie, I want Anthea, she does it for me!”

He added: “She just ages like a fine wine. She looks exactly the same as when I was a kid or in fact she probably looks even better.”