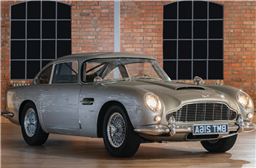 James Bond is due for quite the celebration when the 60th anniversary of the first 007 film rolls around this fall. Christie’s and EON Productions are planning a two-part charity auction in September, while the BFI will host an in-conversation series and screenings later in the month. Then, just ahead of James Bond Day in October, Shirley Bassey is to headline a retrospective concert at the Royal Albert Hall.

Titled Sixty Years Of James Bond, the auctions will feature 60 iconic lots celebrating all 25 films in the franchise. The live auction will take place in London on September 28, while an online auction will run from September 15 through James Bond Day on October 5. The headline piece of the live auction is a silver birch Aston Martin DB5 stunt car, one of eight replicas built for last year’s No Time To Die, and estimated to sell for up to £2 million. In total, there will be 25 lots from No Time To Die and six representing each of the actors who have played the super agent: Sean Connery, George Lazenby, Roger Moore, Timothy Dalton, Pierce Brosnan and Daniel Craig.

Also on the block are a five-night stay at the Fleming Villa in Jamaica where Ian Fleming wrote all fourteen Bond books, a Swarovski-encrusted, gold-plated egg in the style of Faberge from Octopussy and Dalton’s signed tuxedo from Licence To Kill. (Browse the lots here and here).

Proceeds will benefit 45 charities including The Prince’s Trust in its work with young people and the Prince of Wales’ Charitable Fund’s support of charities assisting serving and former members of the three Intelligence Agencies and UK Special Forces.

In further celebration of the super spy, the BFI will host the James Bond At 60 Weekender from September 30-October 2 featuring in-conversation events with producers Michael G. Wilson and Barbara Broccoli plus a behind-the-scenes look at stunts and SFX work with Special Effects Supervisor Chris Corbould.

The BFI IMAX will screen Craig’s three most recent performances as 007. Tickets go on sale at the BFI website from August 4.

On October 4, the music of Bond will take center stage at the Royal Albert Hall for The Sound Of 007 In Concert, headlined by Shirley Bassey who earlier this year opened the BAFTA Film Awards with a show stopping performance of “Diamonds Are Forever.”

Produced by EON Productions, The Sound Of 007 will be curated by five-time Bond composer David Arnold and feature the Royal Philharmonic Concert Orchestra. Tickets are on sale.