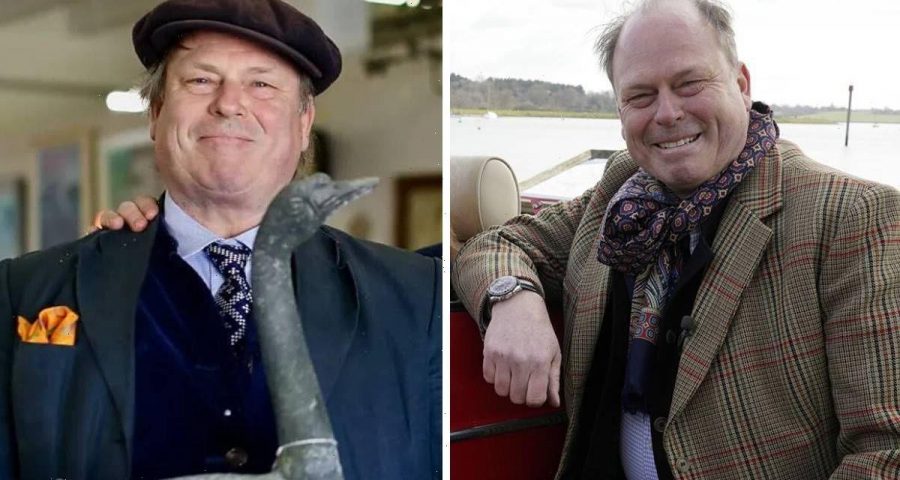 James Braxton has been sharing his expertise on Antiques Road Trip on BBC One since 2016. He has also gone on to star in various other shows such as Dealing with Dickinson, Celebrity Eggheads and Bargain Hunt. As well as a television personality, the 59-year-old is an entrepreneur, owning a few businesses that aren’t all to do with the world of antiques.

More than three decades ago, Braxton purchased his first auction company Edgar Horns and acquired an interest in the auction room Bracketts in 1995.

He is also the founder of Dreweatts, founding director of The Fine Art Auction Group and one of seven founds of the e-commerce business iBrax.com.

One of his latest ventures is Guildhall Weymouth, a wedding and party venue that has been open since 2018.

The other business that make up James’ empire is his family-run pub.

Who is Antiques Road Trip star James Braxton married to?

James Braxton is the proud owner of The Lamb Inn, a pub and hotel in the village of Wartling, which he runs with his wife Joanna.

The BBC One star is relatively quiet when it comes to his personal life and especially his marriage.

James hasn’t revealed any details on how they meet or how long they have been together.

However, it is known that the couple have four adult children together.

James and Joanna’s children are sons Ned and Charlie and daughters Amelia and Annie.

They all reportedly help run The Lamb Inn, making it a family affair.

James’ sons Ned and Charlie also run a micro-brewery together in Hastings called Brewing Brothers which supplies local beers and craft ales for the pub.

In 2020, he posted a picture of his daughter Annie sat opposite him, enjoying a meal, with the caption: “Little market research in @harrysdolcevita with @braxtonannie.”

He has also previously shared a picture of him with all four children outside The Lamb Inn celebrating Christmas drinks.

James very rarely posts any pictures of his wife Joanna, possibly due to her wanting to keep her privacy.

The last time she was seen on his socials was in 2020, wearing a puffy green coat and a fluffy hat outside.

He wrote: “Gardening day, big up Prince Charles and @highgrovegarden for the tree guard design, somewhere amongst the diagonal chestnut is a walnut tree!”

While they are not openly affectionate, it seems they are a happy family of six.

James Braxton will be starring in the latest episode of Celebrity Antiques Road Trip on BBC Two.

The synopsis reads: “The home counties are visited by a couple of veteran BBC broadcasters, award-winning journalist Clive Myrie and his friend and fellow journalist Reeta Chakrabarti.

“Powering through the countryside in a sporty motor, they each have £400 to spend on some antiques that will hopefully provide big returns at an auction in Lincoln.

“By their sides to provide the antiques know-how are auctioneers James Braxton and Izzie Balmer.

“As well as scampering about for potential antique delights, Clive visits a recently discovered arts and crafts masterpiece within a two-up-two-down in Cambridge, while Reeta finds out why Byron and his buddies loved the watery pursuits of wild swimming. James needs little excuse to strip for a dip.”