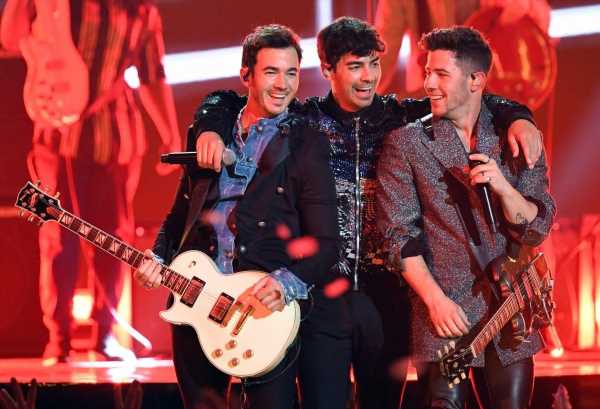 The Jonas Brothers have lately been “feeling so cool!” Ever since the band of brothers reunited in 2019, they’ve been back in full force. The brothers just released “Remember This” during the NBC Olympics closing ceremony coverage, but a few of the brothers have also been cast in movies. After watching Chasing Happiness, viewers learned that the brothers have experience in acting. Kevin acted in commercials and Joe and Nick performed onstage.

A Jersey Boys film adaptation has been in the works and one of the Jonas Brothers confirmed that he will star in it.

Details on the ‘Jersey Boys’ movie

Unfortunately, the production is in its early stages of filming. So, there have been no official sneak peeks or photos from the set. However, the movie will be starring theatre veterans Andy Karl, Matt Bogart, and CJ Pawlikowski. Karl is a Tony-nominated Broadway actor who has appeared in multiple productions, including the 11-year run of Jersey Boys on Broadway. Bogart performed in the production as well. Pawlikowski performed in an off-Broadway run of the show until the nationwide COVID-19 shutdown.

However, this won’t be the first cinematic adaptation of the musical; there has already been a Jersey Boys movie. Directed and produced by one of Hollywood’s biggest names, Clint Eastwood, the movie premiered in 2014. Franki Valli and Bob Gaudio, two members from The Four Seasons, were executive producers.

It is not yet clear how the new film will differ from Eastwood’s project, but one of the Jonas Brothers encouraged his fans to “stay tuned for more exciting news.”

Drum roll, please–Nick Jonas, a drummer no less, is set to play Valli in the future musical film. The multi-talented musician plays several instruments on top of singing including drums, guitar, bass, and piano. Jonas revealed the news on his social media.

The youngest Jonas brother is a former Broadway star. He performed in Les Miserables, Annie Get Your Gun, and Beauty and the Beast in his childhood. Later on, the former Disney star made a huge Broadway comeback in 2012 in How to Succeed in Business Without Really Trying. The career switch to theatre occurred around the time when the Jonas Brothers were nearing their break.

From here, it was clear that Jonas wanted to branch out further from music.

Fans hung on the edge of their seats when they watched the all-grown-up band’s documentary, Chasing Happiness. The film revolved around the band’s comeback tour, “Happiness Begins,” and focuses on the brothers’ journey together and apart. Throughout the documentary, the brothers finally reveal what really went down in their 2013 breakup.

In a shocking revelation, the movie reveals that Nick initiated the band’s breakup and pursued his own passions. Thus, the Nick Jonas solo era was born. “The Jonas Brothers will be no more,” Kevin recalls his brother saying whereas Joe admits he was surprised at Nick. Although fans were upset the band wasn’t together for a while, many fell in love with the youngest brother’s new music.

Jonas created some of the industry’s most popular songs; “Jealous,” still plays on the radio years after its release. The singer also continues to write his own music separate from the Jonas Brothers, releasing “Spaceman” in 2021. Nevertheless, the band is together and will soon embark on their “Remember This” tour in August 2021.

Since fans now know about how the band split, the brothers have used it as a punchline for jokes. Humor is frequently seen across the three brothers’ social media accounts. But Nick’s 2021 Saturday Night Live monologue attracted many views and, of course, laughs. Kevin is seen in the audience asking his brother, “Are we good? ‘Cause, I see you’re doing a lot of solo stuff. Are we still a band?” The exchange was brief but effective in showing the family’s sense of humor.