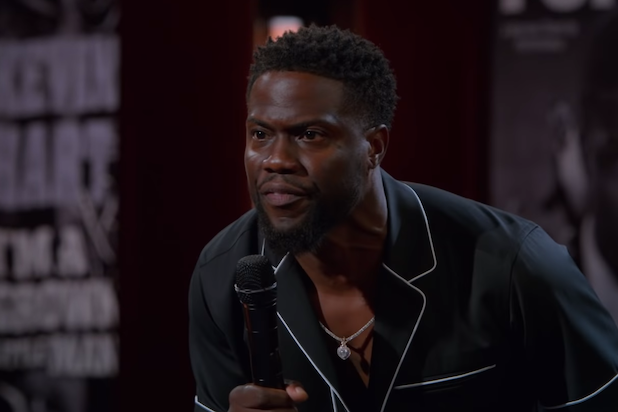 More than 21 million Netflix households have watched “Kevin Hart: Zero F**ks Given” in its first four weeks, the leading streaming service said on Tuesday. That makes the Kevin Hart stand-up Netflix’s No. 1 comedy special of 2020.

A Netflix “view” is counted when a member household watches at least two minutes of a title. To Netflix, two minutes indicates that the choice was intentional.

This marks the first time Netflix has released viewership statistics for a stand-up special.

“Kevin Hart: Zero F**ks Given” was produced through the comedian/actor’s Hartbeat Productions.

In the special, “Kevin Hart serves up laughs and brick oven pizza from the comfort of his home and dishes on male group chats, sex after 40 and life with COVID-19,” according to Netflix.

Hart contracted COVID-19 fairly early on in the pandemic. At the time, he kept it to himself — and for very good reason.

“The problem is that I had it around the same time as Tom Hanks, and I couldn’t say anything because he’s more famous than I am,” he said while performing at one of Dave Chappelle’s socially distanced comedy shows in Ohio in August, according to the New York Post.

Sure, we get that.

“Zero F**ks Given” marks Hart’s second standup special at the streaming service, with the first being 2019’s “Kevin Hart: Irresponsible.” Also at Netflix, Hart has the docuseries “Don’t F**k This Up,” which launched last year and captured the actor’s day-to-day life in the period following the fallout of his Oscars hosting controversy, and the special “Kevin Hart’s Guide to Black History.”