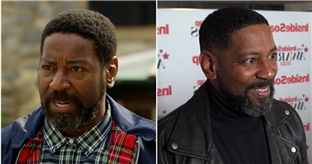 Here at Metro.co.uk, we’re aware that when you join a new soap – it’s a very big deal.

For Kevin Mathurin, who plays Charles Anderson in Emmerdale, he was fully aware of how high the stakes were when he joined the soap – but the pressure was perhaps increased even more due to his mum!

After meeting his distant daughter, Naomi (Karene Peter), Charles has faced the wrath of a very angry and haunted Nicola (Nicola Wheeler), who was attacked by a group of girls a few months ago – with Charles’ daughter being one of them.

The storyline took another interesting turn this week, during the soap’s special episodes to celebrate Emmerdale’s 50th anniversary.

When Charles and Nicola found the abandoned minibus in the middle of the storm, they attempted to work together and put aside their differences.

However, Nicola’s anxiety and fear her partner was in serious trouble caused her panic to increase, and so she suffered a panic attack in front of the person she’s been trying to destroy.

Being a part of the 50th anniversary episodes was a huge privilege for Kevin, and it meant a lot to him to be a part of the milestone on a soap his beloved mum has been watching since the very beginning.

‘To be in it and involved in the 50th anniversary, it’s amazing and I feel privileged to be a part of something so special’, he told Metro.co.uk.

‘Even though I’ve been working successfully for 15 years, when I got Emmerdale my mum was like, “you’ve made it, well done”. I’ve been saying to people this evening that it’s two years since I’ve been in it myself and it’s flown by so quickly. It shows how much I love my job that it’s flying by.’