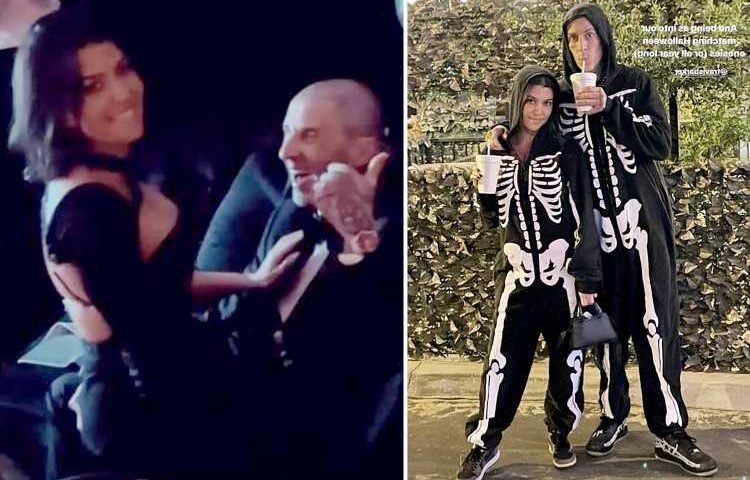 KOURTNEY Kardashian ditched the makeup in a rare photo as she posed with her fiancé Travis Barker in matching skeleton pajama onesies.

The Keeping Up With the Kardashians star celebrated her future husband's birthday over the weekend with a delicious cake and wild lap dance. 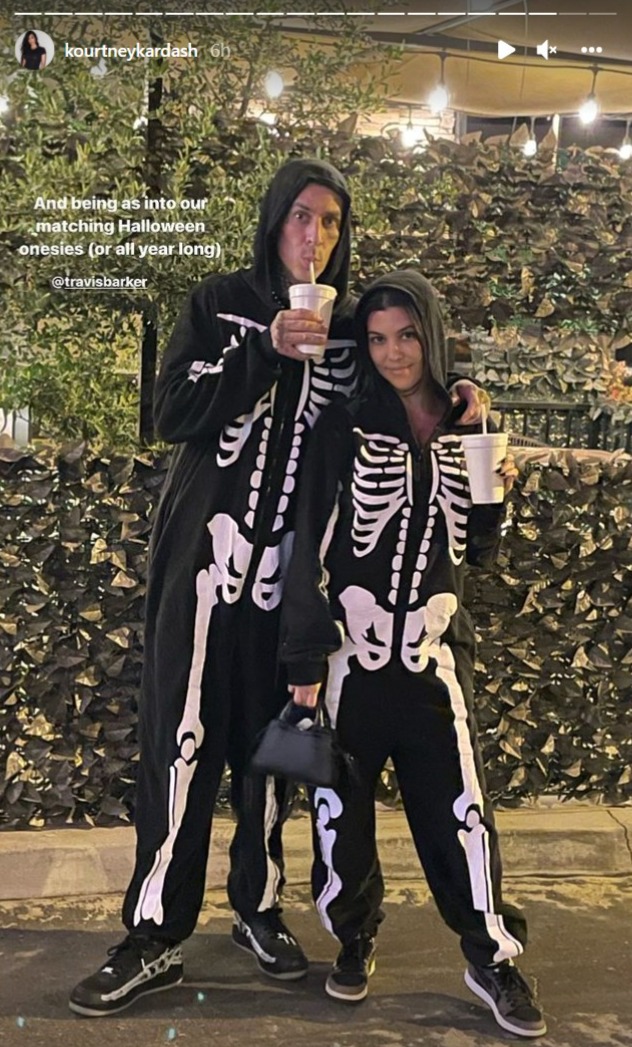 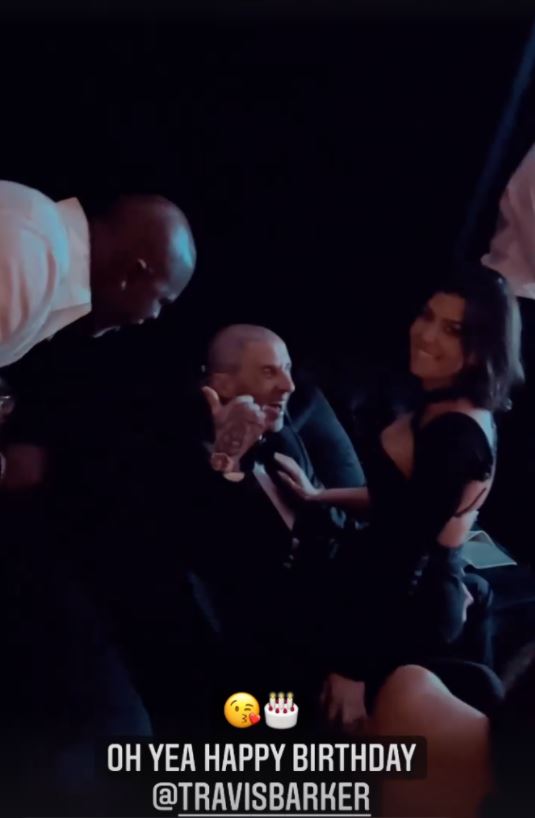 Kourtney, 42, embraced her natural beauty in a never-before-seen photo shared on Sunday night.

The reality star went makeup-free in matching skeleton onesie pajamas with her fiancé Travis Barker as she wished him a happy 46th birthday.

The photo was one of many shared in honor of the Blink-182 rocker for his special day, as the TV personality gushed over her man.

"Grateful for the day you were born @travisbarker," Kourtney captioned her posts.

"For our walks in the neighborhood and being as into our matching Halloween onesies (or all year long," she continued.

The mother of three gifted her future hubby a blueberry cake as they returned home from the festivities, covered in whipped cream and the words "happy birthday" written in chocolate.

The Poosh founder and her man stirred controversy while attending the star-studded event, though, as she was seen grinding and gyrating on his lap during the reception.

Kourtney was branded "embarrassing" for straddling Travis and "half-twerking" on him.

A wedding guest shared a video of Kourtney with her legs around Travis as his band's 2000 hit song All The Small Things played in the background.

A group surrounded the couple, including Kris Jenner's long-time boyfriend Corey Gamble, who egged them on during the wild moment.

Kourtney was filmed dancing on Travis' lap as the song played, and was seen leaning in to give him a kiss as he grabbed her butt.

The couple burst out laughing when they noticed Corey, 41, enthusiastically dancing behind Travis and singing in his ear.

However, fans were not enthused as they ripped the newly-engaged pair for giving them "second-hand embarrassment."

Many took to Reddit, with one writing: "I just can’t get over Corey literally living his best life touching heads with Travis while he gets a lap dance."

"Lol with that half-a**ed almost-twerk. Like…what was that? Someone should have told her to stop," another posted.

Fans also branded Kris Jenner's boyfriend as "Creepy Corey" for the bizarre moment, slamming the talent manager for getting too "close."

One critic wrote on Reddit: "Corey looks like he's ready to jump right in there. So creepy."

"Wtf is Corey doing though? I wish he would move!" another commented.

A third posted: "Wondering if Corey is somewhat tryna c**k block. Lol. This is all too weird."

Kourtney and Travis announced their engagement last month after he popped the question in a stunning Montecito Beach proposal.

A source recently told Life & Style that the pair have no intentions of having a long engagement.

They shared to the publication that the couple is “planning to exchange vows next year,” adding that "Kourtney is already in wedding planning mode." 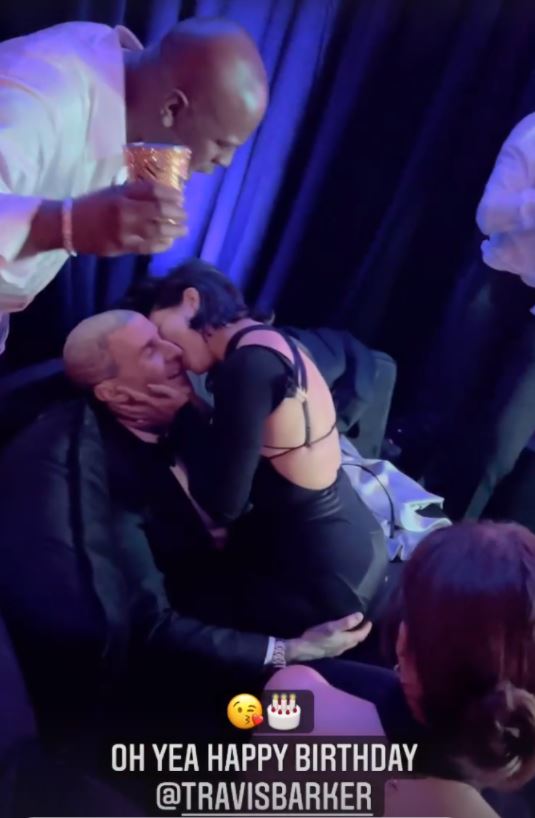 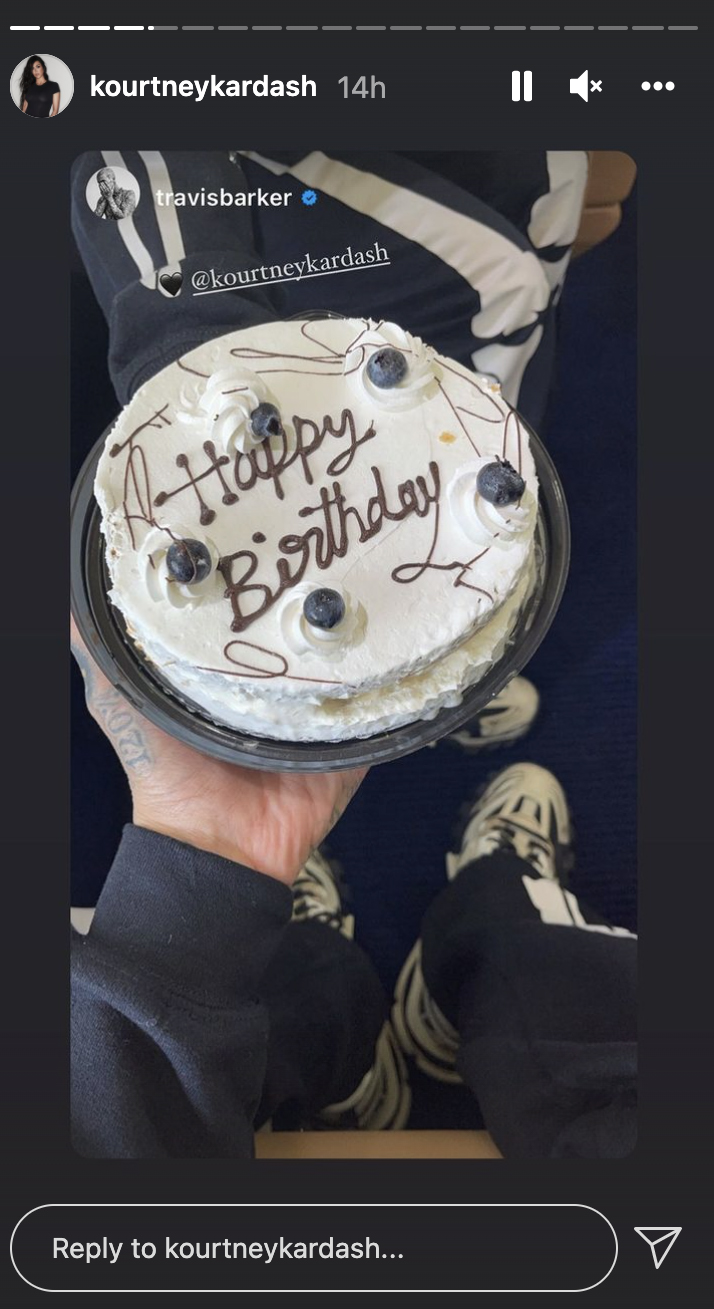