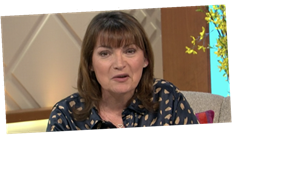 Lorraine Kelly invited YouTuber KSI back to Monday's show to apologise for the prank last week, that he had no idea about.

The 61-year-old was rumbled on Saturday Night Takeaway at the weekend for taking part in Stephen Mulhern's on-screen dares that saw the host yawn loudly while KSI was talking.

Interrupting the interview again, she told viewers that she was oddly suffering from a nasty case of cramp.

At the weekend it was unveiled that Ant McPartlin and Declan Donnelly had been behind her extremely odd behaviour.

Fortunately the Don't Play hitmaker was in good spirits and found the entire ordeal hilarious.

It was evident that he didn't have any idea about the trap he had fallen into.

He did explain that Lorraine had contacted him straight after the show had aired to explain.

Laughing about being at the centre of the joke, KSI said "You text me straight away to explain," which he seemed to appreciate.

Meanwhile, Lorraine was very apologetic but did alert the star that it wasn't her fault and did offer the chart topper another opportunity to interview again.

After the air had been cleared the pair chatted about KSI's up and coming gigs, including taking part in the celebrity version of the Great British Bake Off.