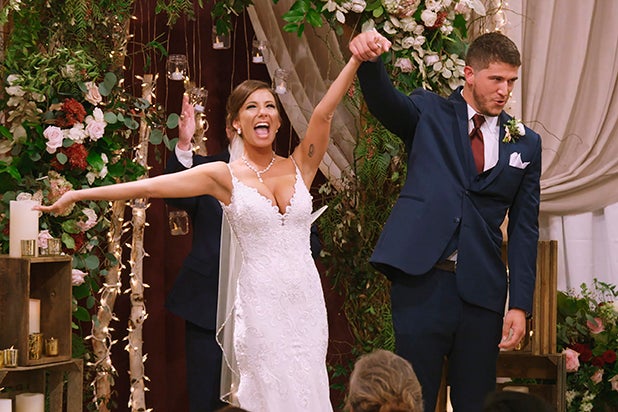 Fans have been dying to find out what went down with the cast of “Love Is Blind” in the 15 months since the show finished filming. Are the couples who got married still together? What happened after the breakups? What was it like for the cast to watch themselves on the show? Does Jessica still feed her dog wine?

We got answers to at least a few of those questions, and to a few we never would’ve thought to ask on Thursday’s reunion special. Hosted by Nick and Vanessa Lachey, the special brought together all 12 of the main cast members to discuss their experience on “Love Is Blind” and share what’s become of them since.

Much like the show itself, the reunion consisted of lengthy and deeply sappy ruminations on love, interspersed with a few truly shocking moments to make you wonder if you’ve become untethered from reality. Here are seven of the biggest surprises:

Gigi and Damien are back together

It’s unbelievable that the two couples who got married on the show are still together. No one could have ever predicted that to be true. But it’s even more unbelievable that Gigi and Damien — they of the mid-workout shouting match, of the “not mind-blowing” sex and the explosive wedding breakup — are somehow dating again. Their post-ceremony shouting match certainly made it seem like whatever love they had for each other wasn’t going to save the relationship. But love, in addition to being blind, is apparently extremely durable.

“Looking back, I respect his decision,” Gigi said, being surprisingly understanding in response to Damien rejecting her at the altar and sending her running the street in tears. “Where we are now, it’s so right for us. We can just date. He has his own place, I have my own place and we can just get to know each other at our own pace.”

Jessica had a rough time at the reunion. Not only was she forced to confront two of her exes and relive some evidently painful moments that the show captured on camera, she also got an earful from an outraged Amber, who did not take kindly to discovering Jessica’s lingering feelings for her fiancé upon watching the show.

“To see [Jessica] throwing herself at him in Mexico–bitch, you’re sheisty,” Amber said. “You’re so fake. Coming to my face like we were cool, you’re so fake. I think you’re a very disingenuine [sic] person, and I hope seeing this, you do grow from it, because that is not what the world needs is women that go behind people’s back like that.”

To her credit, Jessica took it all very well, offering a very mature and sincere apology to both Amber and Barnett and her poor ex-fiance Mark.

A surprise proposal — kind of

So much happened after their breakup that it’s easy to forget that the disintegration of Carlton and Diamond’s relationship was one of the season’s most dramatic moments. But the duo put on a surprisingly nice show of goodwill at the reunion, putting their issues aside to show respect and affection for one another. That was all good and fine until Carlton made the unexpected choice to return the engagement ring at the reunion. It was already incredibly awkward, even before he decided to get down on one knee and put the ring on her finger… as an apology? A gesture of friendship? Unclear.

They should have questions.

Kelly wanted to keep dating Kenny after the show

Kenny and Kelly seemed like the show’s most stable couple right up until the very end, when Kelly started saying she didn’t feel an “intense infatuation” with her fiancé and opted to say “I don’t” instead of “I do.” Kenny didn’t take it super well (presumably, few would having been humiliated on a TV show in front of all your friends and family) lashing out at the show’s producers and leaving the wedding alone in a huff.

But a tearful Kelly hinted at the reunion that she hadn’t anticipated that that would be the end of their relationship. “I think we both agreed to an ‘I don’t’ way before the wedding,” she said before turning to Kenny. “I did love you, I was not in love with you, as we mentioned, but I wanted to continue our journey of dating and getting to know each other and that didn’t happen.”

Amber and Barnett are still together, but to hear them tell it there was a time where that nearly wasn’t the case.

“There was one point where we almost broke because we had such expectations out of what we wanted out of a husband and wife. We knew we were married and we knew we were in love, but we were still learning each other,” she said, citing their joint finances and Barnett’s flirty tendencies as specific points of tension. “Normally in a relationship, as you’re dating, you take time and you adjust to that. But we were married, so immediately we expected it to be different … At one point, actually, I had called about getting a divorce lawyer.”

“Oh, you threw the D-word out?,” responded host Vanessa Lachey.

They all, for some reason, still think love is blind

Meeting someone through a wall, on a TV show and choosing to get engaged within 10 days is a patently ridiculous way to start a relationship. But for at least three of the couples, the story had a happy ending. And, for some reason, none of the others said they regret having participated in the experiment either. In an unexpected twist, they all said they’d learned a lot from being on the show that they’ve applied to their subsequent relationships. Growth!

The Lacheys closed the reunion by asking the cast, via a show of hands, which of them believes that love “can be” blind. Every single one of them — even Jessica! — raised their hands.