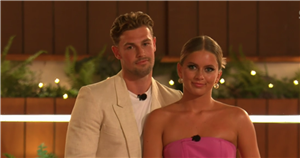 After weeks of entertaining fans across the nation, ITV's hit dating series finally came to end on Monday night (Aug 1) with viewers in high anticipation over who will scoop the winning prize.

With fans voting for their favourite couples from the night before, many were surprised to see Tash and Andrew come in fourth place, while others thought it was a well deserved spot.

One person penned: "No I’m sorry but Tasha and Andrew being 4th is a joke, they should’ve been second or first in competition with Ekin and David."

Another shared: "I thought Tasha and Andrew might have sneaked into top 2, you know I wasn’t expecting fourth place."

Although Tasha and Andrew had a fairly turbulent start, they appeared to always gravitate towards each other even during rocky times.

But despite their previous issues, the couple became the first to make it official when Tasha asked Andrew to be his girlfriend.

This year's series of Love Island has become the most watched yet with viewers racking up the numbers with the number of times certain episodes were streamed.

On June 28, viewers appeared to enjoy the heart rate challenge the most as it hit over 100million streams on ITV Hub.

Things started to heat up on the show as the islanders performed their sexy lap dance routines, with 64% of fans streamed it on the night it aired watching live between 9-10pm or through the 'start again' streaming during the same time slot.

During tonight's final episode, in true Love Island tradition the remaining finalists were tasked with performing a dance routine with one another for their final formal party.

In the evening, the islanders declared their love for one another as they read out speeches expressing how their time in the villa was made special by their other half.

There was hardly a dry eye in the villa with fans at home also feeling the emotional scenes.

Taking to Twitter, fans discussed the contestants' speeches online and which couples made the most impact.

This is a live TV story and is being constantly updated. Please refresh the page regularly for the latest news, pictures and video.

You can also get email updates on the day’s biggest TV stories straight to your inbox bysigning up for our soaps and Hot TV newsletters .

Get all the very best news, pictures, opinion and video on your favourite TV shows by following Daily Star every time you see our name.

You can also sign up forTwitter alerts for breaking news by following@starbreaksnews and follow us@dailystar for all the latest updates.

Keep up-to-date with your must-see TV stories, features, videos and pictures throughout the day by following us onFacebook atfacebook.com/DailyStarShowbiz