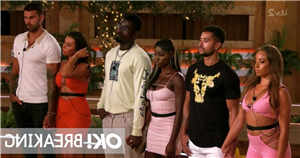 Love Island revealed the couple with the lowest votes on Wednesday's episode.

During Tuesday's instalment, Paige Thorne received a text asking all of the Islanders to gather at the fire pit.

The contestants then discovered that the public had been voting for their favourite couple and that some Islanders were now at risk of leaving the Villa.

It was revealed that Dami Hope and Indiyah Polack, Paige Thorne and Adam Collard, Danica Taylor and Jamie Allen, had received the lowest votes.

With it revealed on Wednesday's episode that Danica and Jamie were dumped, leaving their Islanders emotional as they bid a tearful goodbye.

Reacting to the news, Danica insisted that she was walking out the villa with a "genuinely good connection" and that she was "proud" of herself.

She added: "It's been the most surreal experience of my life, very happy to be leaving with Jamie."