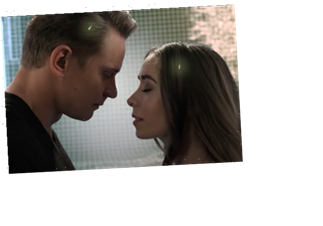 Who knew Ray Romano could sound so poetic delivering lyrics from a Beyoncé classic?

In the first trailer released for HBO Max’s “darkly absurd” comedy Made for Love (embedded below), Romano recites lines from Queen Bey’s “Crazy in Love” while we get our first glimpse at the streamer’s upcoming “cynically poignant” love story.

The series, set to debut in April, “follows Hazel Green (How I Met Your Mother‘s Cristin Milioti), a thirty-something woman on the run after 10 years in a suffocating marriage to Byron Gogol (Tell Me a Story‘s Billy Magnussen), a controlling tech billionaire,” reads the official description. “Soon, she discovers that her husband has implanted a monitoring device — the Made for Love chip — in her brain, allowing him to track her, watch her and know her ’emotional data’ as she tries to regain her independence. Through the chip, Byron’s able to watch Hazel’s every move as she flees to her desert hometown to take refuge with her aging widower father Herbert (Everybody Loves Raymond‘s Romano) and his synthetic partner, Diane.”

Press PLAY on the trailer below, then shower us with your thoughts in the Comments.