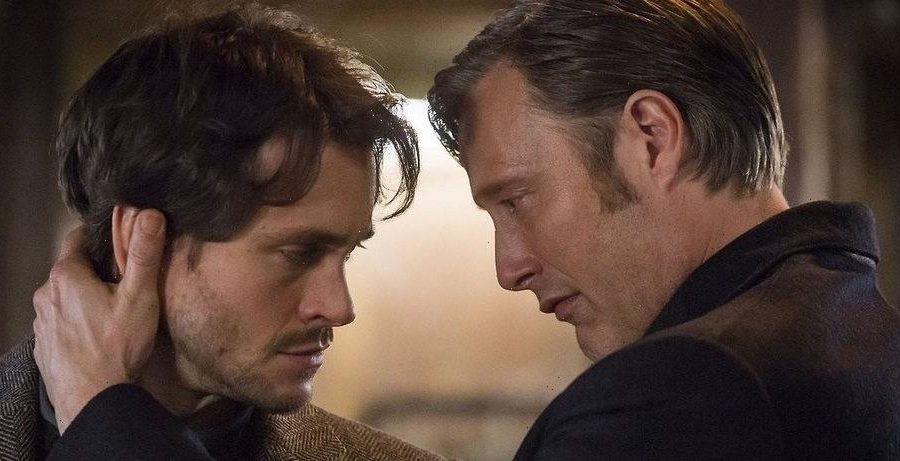 Fannibals, this one is for you. Mads Mikkelsen, the star of Bryan Fuller’s cult horror series Hannibal, confirms what all fans of the short-lived NBC drama suspected: Hannibal Lecter and Will Graham almost kissed. In fact, Mikkelsen revealed that it was his suggestion that Hannibal and Graham smooch in the charged final Hannibal scene in the Season 3 finale, which unexpectedly became the series finale after NBC dropped the axe.

In a lengthy and endlessly fascinating profile with Vulture (I highly recommend you read the whole thing to learn all things Mikkelsen, including his time as the “bitch” in Rihanna’s “Bitch Better Have My Money” music video and his doomed audition for Fantastic Four), Mikkelsen admitted that Hannibal and Will almost kissed in the final scene of the Hannibal season 3 — and series — finale. In fact, he wanted to kiss co-star Hugh Dancy (we knew it). So much so that there might be one take floating around of the two of them…actually kissing. Mikkelsen said:

“We actually did a couple of takes of the very last scene where we were looking at each other, and it was a little too obvious — it was almost a kiss. Me and Hugh were like, ‘Why not? We have a couple of takes. Let’s do one. It might be cool.””

While Mikkelsen and Dancy were on board with the kiss between Hannibal and Will, showrunner Bryan Fuller thought that it was “too obvious.” Mikkelsen said, “We never went for the kiss. Bryan loved it, but he was like, ‘Too much, guys. It’s too obvious.’ And he was absolutely right.”

As much as it pains me and other Fannibals to admit, Fuller was probably in the right to keep the charged homoerotic relationship between Hannibal and Will as subtext. There was always a twisted, almost codependent dynamic between the two of them, and it’s one that plays better in loaded glances and hand brushes. But that doesn’t mean that Mikkelsen (and the rest of us) can’t mourn the cut kiss. “I think we were just stuck on that. And a lot of the Fannibals wanted it as well,” Mikkelsen said. “It’s been a subject of homoerotic fan art. And for good reason, because they are so united as twins in many ways. But we never wanted it to be a physical thing. It was something much bigger than that.”

So it wasn’t network TV censors that held back such an explicit moment, but a creative choice. But Mikkelsen mused that the limitations of making a show on a broadcast network like NBC allowed Hannibal to make the impact it did, by sidestepping outright gore for visual and emotional “poetry.”

“I’ve been wondering if we had been on some other platform and could do whatever we wanted, would we have gone more for the graphic stuff and forgotten some of the poetry?” Mikkelsen said. “Maybe it was a good thing we had to hold back. It served the show really well that we didn’t go full-blast Walking Dead on it.”

Though six years have passed since Hannibal went off the air, fans and the crew haven’t given up hope that a fourth season might still happen. Talks of a revival have floated around for years, and the show’s arrival on Netflix last year brought those hopes to the forefront. Mikkelsen told Vulture that he’s always open to reprising his role as Hannibal, despite the intensity of the show.

“The work itself was brutal because we had long hours, with scripts coming in late,” Mikkelsen said. “It’s TV, and what we were doing was elaborate. The texts were high-IQ texts. The monologues or the dialogues were always about fine art, music. You had to learn Japanese, Hungarian, and words you had simply never heard before. And you had to do it within two hours because everything came so late. Having said that, I would love to go back. Everybody wants to go back, and if there’s only one season and we’re sure about that, he can finish it in a proper, surprising, stunning way.”