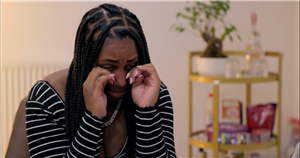 Kesia broke down on Monday's edition of Married at First Sight.

The 36-year-old buisnesswoman burst into tears as she revealed to her family that she was getting married to a complete stranger on the hit Channel 4 reality show.

The brunette beauty sat down with her brother and her grandfather to break the big news to the pair, but she got all chocked up when it came to giving the important speech as she broke the news.

She exclaimed that she was an "idiot" as she cried her eyes out to her relatives as she revealed her part in the marriage.

Whilsty at first her family said they were "speechless", the conversation went on to have a more encouraging turn for the reality star as her family happily supported her.

Her grandfather explained: "I'm here for you, anytime you need and kind of advice or any kind of support".

Meanehile her brother had sterner words, not necessarily for his sister, but for the experts.

He exclaimed: "I've got advice for the experts, You better stay clear if this goes wrong, not from me, from you [Kesia]".

Earlier in the episode, she revealed that she needs a strong male partner because she hasn't necessarily had a male presence in her life due to her lack of relationship with her father.

Kesia explained: "Growing up, there wasn't always a strong male presence in the household. My parents split when I was months old."

She continued: "My relationship with my dad, or lack of, has definitely played a huge part in how I am in relationships."

The reality star emphasised her relationship with her grandfather who she would later breek down to in the episode, as she said: "But, most of my happy memories are with my granddad who's always been protective of me and my siblings."

Meanwhile the body contouring clinic owner later joked how she needs help to find a man as she sat down with the relationship expert, Paul C Brunson.

She joked: "I'm 36, and getting married to a stranger because clearly, I can't find a husband for myself."

She later explained to Paul: "I like a man who knows how to take control, just you know, can kind of guide or lead the way and I think that's because in every other area of my life, I'm in charge. I am the boss."