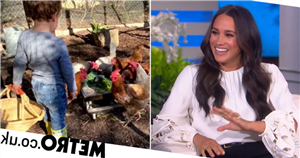 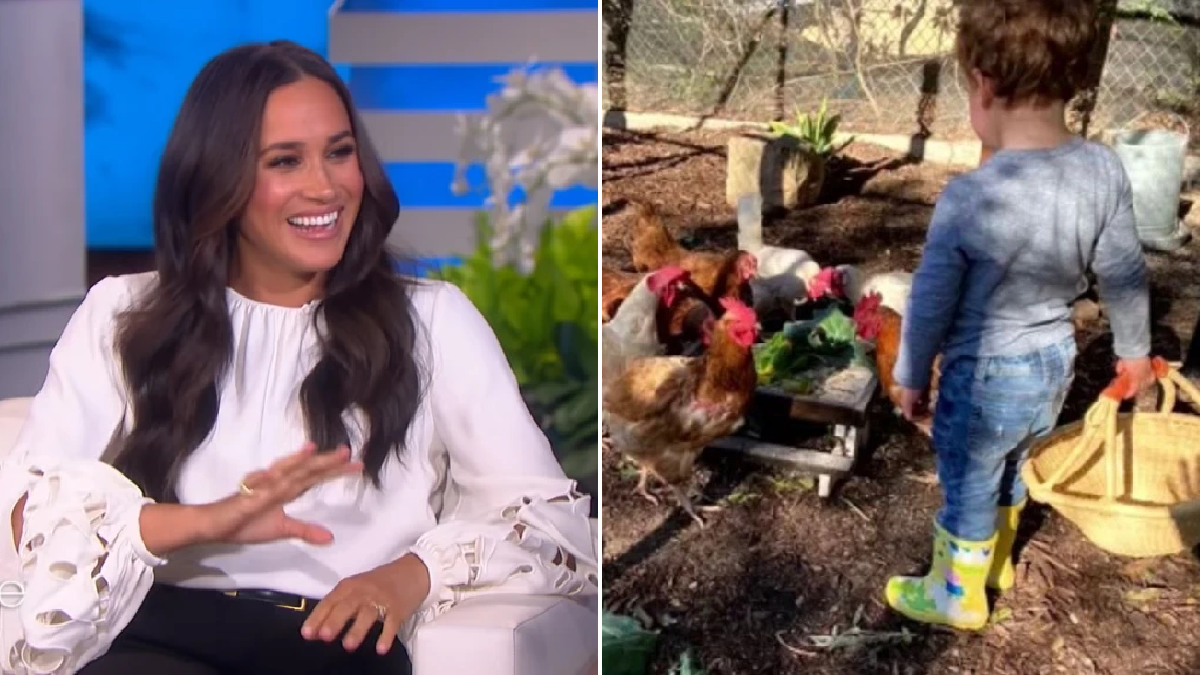 Meghan Markle has shared a rare picture of her and Prince Harry’s son Archie during her televised interview with Ellen DeGeneres.

The Duchess of Sussex, 40, surprised fans as she offered a glimpse at the little one, who is now two, and his ‘chick inn’ as she sat down with the presenter on The Ellen Show.

Taken from behind so his face is obscured, the photograph showed Archie standing in the family’s chicken coop that was first seen in Meghan and Harry’s bombshell interview with Oprah Winfrey in March.

Archie watches the birds as they feed off a tiny picnic table while holding a little yellow basket, presumably to help carry the eggs.

Commenting on the image, Ellen remarked: ‘He’s so sweet with the chickens, too. Archie is just such a gentle soul.’

‘Aww, thank you,’ Meghan replied, before revealing that Archie ‘loves being a big brother’ to her daughter Lili.

Going on to speak about being a parent to two children, after welcoming Lili in June, she added: ‘Someone told H (Harry) and I that when you have one kid it’s a hobby, and two children is parenting.

Elsewhere in the interview, Meghan revealed how son Archie dressed as a dinosaur for Halloween, while her five-month daughter Lili was a ‘little skunk like Flower from Bambi’.

Meghan spoke of how she spent the celebration with chat show host Ellen and her wife, actress Portia de Rossi – her neighbours in the celebrity enclave of Montecito in California.

But Meghan said two-year-old Archie and his baby sister were ‘not into’ Halloween at all, with Archie only staying in his costume for less than five minutes.

Meghan and Harry have until now remained incredibly private about Lili, who was born in June and was named Lilibet after the royal family’s nickname for the Queen.

They are yet to share a photo publicly of their daughter.

During the interview on The Ellen DeGeneres Show, Meghan also talked about how Lili was teething, saying “Anything to relieve that”, before DeGeneres jokingly suggested tequila.

The duchess also revealed how she and Harry once went to a post-apocalypse-themed Halloween party disguised in costumes when they were dating to have ‘one final night on the town’ before it was revealed they were a couple.

They were joined by Harry’s cousin Princess Eugenie and her now-husband Jack Brooksbank who were visiting them in Toronto, Canada.

‘The four of us snuck out in Halloween costumes to just have one fun night on the town before it was out in the world that we were a couple,’ Meghan said.

She added: ‘It was a post-apocalypse theme. So we had all this very bizarre costuming on and we were able to just sort of have one final fun night out.’

The news broke that they were a couple at the end of October in 2016.

Meghan and Harry quit as senior working royals in 2020 in a bid for personal and financial freedom, and have since signed multi-million pound deals with Netflix and Spotify.