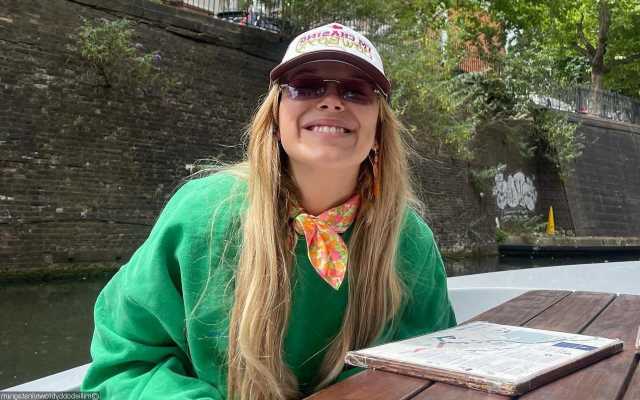 Earlier this month, the ‘Stranger Things’ star got a set visit from her boyfriend Jake Bongiovi while filming a scene for the futuristic action-adventure film in Atlanta.

AceShowbiz –Millie Bobby Brown is currently busy working on her new movie “The Electric State“. While filming her upcoming film on the Atlanta set, the “Stranger Things” favorite is seen flaunting her natural beauty and wavy hair.

On Monday, October 24, the 18-year-old actress sported wavy tresses as she filmed a beach scene for new movie “The Electric State”. In photos surfacing online, she wore a large T-shirt and pink flip-flops as she got into character during a day of filming with her co-stars.

At one point, Millie was seen trying to balance two ice cream cones as she stood in front of a camera, surrounded by extras. The “Enola Holmes” star later donned a pink robe as she walked with a production assistant to stay warm.

Earlier this month, Millie got a set visit from her boyfriend Jake Bongiovi when she was filming a scene for the movie. At the time, Jake pulled up to say hello with an adorable four-legged friend along for the ride.

In photos surfacing online, Millie looked adorable in a denim jacket, matching miniskirt and black leggings. At one point, the actress could be seen riding a bike for one of the scenes.

Meanwhile, Jake looked casual yet stylish in a black T-shirt which he paired with a pair of beige cargo pants. The son of Jon Bon Jovi and Dorothea Hurley was also seen holding his mini tablet while leading his puppy on a leash.

Millie’s latest project is a futuristic action adventure about an orphaned teenager who travels through the American West with a sweet but mysterious robot and an eccentric drifter in search of her younger brother. The script is based on the graphic novel of the same name.

The film boasts an all-star cast including Chris Pratt, Michelle Yeoh, Stanley Tucci and Brian Cox. The project is being directed by Anthony and Joe Russo, who directed “The Gray Man” and several Marvel films, including “Avengers: Endgame“.

Fans can catch up with Millie next in “Enola Holmes 2” in which she reprises her role as the famous detective’s famous sister who is his match when it comes to sleuthing. Henry Cavill reprised his role as Sherlock and Helena Bonham Carter as Enola’s non-traditional mother, Eudoria. “Enola Holmes 2” is set to debut on Netflix on November 4.