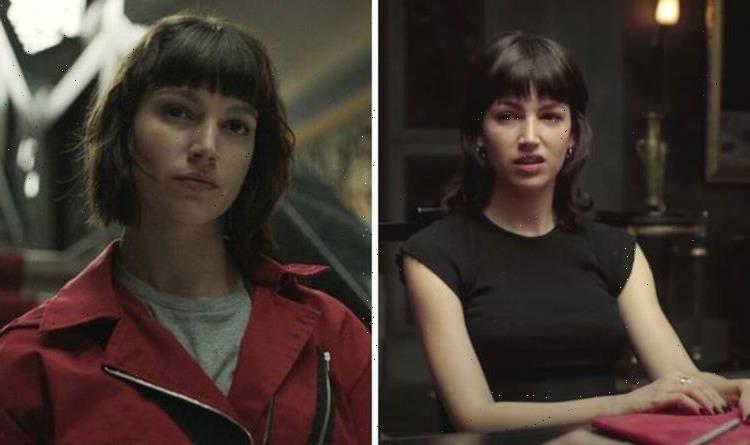 The upcoming second part of Money Heist season five is set to be the final instalment of the series, however, it may not be a sad one as a Tokyo (played by Ursula Cabo) appearance has been confirmed. Although fans said an emotional goodbye to the fiery character, a first-look clip from Netflix hints at her return.

Since 2017, fans have followed the Professor (Alvaro Morte) and his gang of robbers as they pulled off a heist at the Royal Mint and the Royal Bank of Spain.

Throughout the series, the Spanish authorities pulled out all the stops to prevent the gang from getting away with their crimes but failed to accomplish this the first time.

However, when the gang took over and caused havoc in Spain for the second-time, things turned out worse than expected.

As well as the surprising death of Nairobi (Alba Flores), the mid-season finale for season five saw Tokyo sacrifice her life for the others to getaway.

As viewers prepare for what part two will bring, the Professor star hinted: “I think this season is loaded with extreme tension.”

Fans watched as a desperate Colonel Luis Tamayo (Fernando Cayo) went against the advice of his colleagues and sent in eight elite soldiers led by Sagasta (José Manuel Seda) and ordered them to enter the bank and kill on sight.

As well as tensions with the public, things were also heating up among the police officers who didn’t agree with Tamayo’s approach.

This could result in a walkout, especially with Angel Rubio (Fernando Soto), who fans have predicted will change course and join the robbers.

In the Netflix clip, Palermo star Rodrigo de la Serna dropped a huge hint about how the series will be received.

He stated: “We know it’s not going to let down the fans of the show, we know they’re going to love it, what’s coming is very powerful.”

Alvaro laughed: “People will not be able to go to bed after watching any of these episodes.”

Ursula made a surprise appearance and was asked: “If you reappeared in a flashback, do you have any wish about how you’d like to come back?”

The actress grinned: “It should involve a lot of dancing and partying.”

This would be a stark difference from how she left the series, as during a raid Tokyo suffered a number of sniper shots.

As the rest of the gang were getting away through a dumbwaiter, she wasn’t able to move as she would’ve had to climb six floors down.

Tokyo was able to convince Denver (Jamie Lorente) and Manila to go down as she couldn’t make it due to her injuries but she had a plan.

As Gandia (José Manuel Poga) walked over to Tokyo with a victorious smirk, she flashed an unexpected smile and opened her hand, which held multiple pins for grenades, which exploded and ultimately killed her.

There was a glimpse of the cast dancing in behind-the-scenes clips, many of which was shown in the series.

These were during flashback scenes, whenever they would reflect on the preparation they took before the heist began.