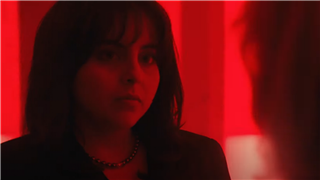 A week after dropping a cryptic first teaser for Impeachment: American Crime Story, FX released a new promo on Wednesday with actual footage of Beanie Feldstein and Sarah Paulson facing off as Monica Lewinsky and Linda Tripp, respectively.

The third installment in the American Crime Story anthology franchise, which premieres Sept. 7, focuses on the 1998 impeachment trial of President Bill Clinton.

The newly released teaser opens with Lewinsky and Tripp — in silhouette — walking towards each other down a long corridor as the young White House intern reveals in voiceover, “I’m in love with him.” When Tripp continues to press Lewinsky for answers, she begins to panic: “What is happening?”

Tripp advises Lewinsky that “it would be smart” to keep her now-infamous blue dress “uncleaned, in your possession.” “I promised him that I would not tell anyone,” Lewinsky says, prompting Tripp to fire back, “He chose to have a relationship with an intern. He’s going to have to resign.”

“My life is over,” Lewinsky eerily says.

The series is based on Jeffrey Toobin’s book, A Vast Conspiracy: The Real Sex Scandal That Nearly Brought Down a President, and features Lewinsky’s involvement as a producer. Lewinsky was a 22-year-old White House intern during Clinton’s presidency and Impeachment: American Crime Story aims to go inside the national scandal that made Lewinsky, Linda Tripp and Paula Jones key figures in the country’s first impeachment proceedings in over a century. The story will unfold through the perspectives of the women involved.

“I find Monica Lewinsky extremely impressive. I find the way that she’s risen from the early trauma that frankly could have buckled anyone… and she’s come back,” John Landgraf, chairman of FX Networks and FX Productions, told reporters in August 2019. “What brought it back around was really Sarah Burgess’ reinterpretation of the material through the prism of these women, not just Monica but Linda Tripp. I think the fact that Monica herself wants to be involved with it — when you’re talking about a period of her life that was traumatic as you could possibly imagine — maybe tells you something about the quality of the material and the vibrancy of the revisionist history that that material can provide now.”

Lewinsky explained to Vanity Fair why she chose to contribute to the series, though she admitted she “was hesitant and truthfully more than a little scared to sign on.”

“But after a lengthy dinner meeting with Ryan [Murphy], I came to understand even more clearly how dedicated he is to giving a voice to the marginalized in all of his brilliant work,” she wrote in the email. “I’m privileged to work with him and the other talented people on the team, and I’m privileged to have this opportunity.”

“People have been co-opting and telling my part in this story for decades. In fact, it wasn’t until the past few years that I’ve been able to fully reclaim my narrative; almost 20 years later,” Lewinsky continued, adding that her role as a producer on the project “allows people like me who have been historically silenced to finally reintroduce my voice to the conversation.”

For more, watch below.