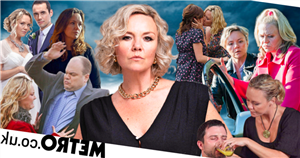 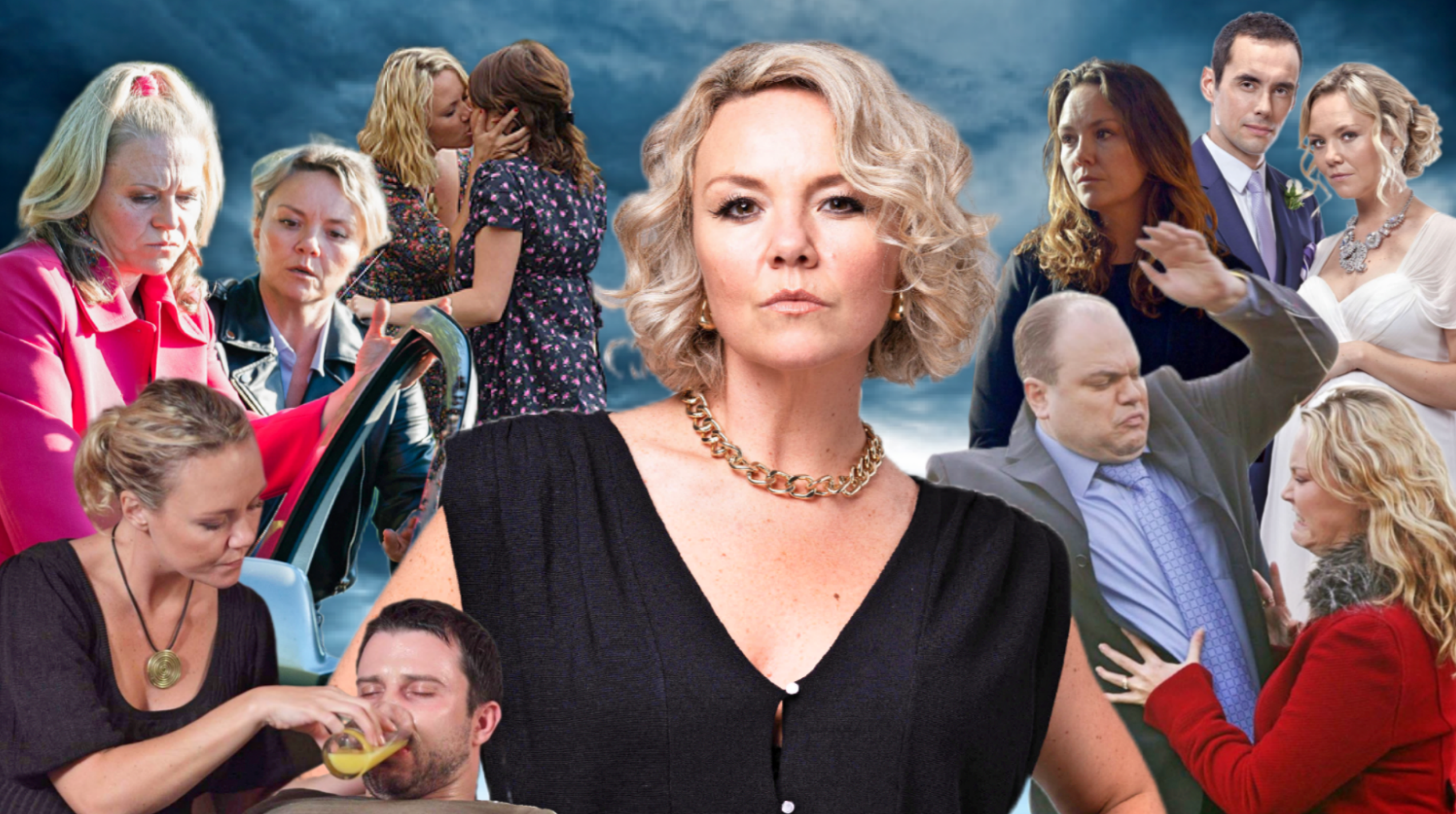 One of EastEnders’ most notorious villains, you have no choice but to love to hate Janine Butcher. I don’t like to use the phrase ‘soap superbitch’ lightly but she is the camp queen of crime in Walford.

She made a long awaited return to the show in 2021 and it’s not hard to work out why fans had missed her and spent years relishing the prospect of a comeback.

Vicious, conniving and with some of the most acerbic quotes in the history of the genre, she is soap baddie royalty.

Once again, many are screaming at their TVs at her deplorable actions – with her victim this time being Linda Carter.

When Charlie Brooks first returned to the show that rightly made her a household name, Janine protested that she was a changed woman and she actually stuck to that for a very long time.

Overhauling her despicable behaviour to try and regain custody of daughter Scarlett, she was determined to prove she is a fit mother.

She then seemed to genuinely fall in love with Mick (Danny Dyer). We were all waiting for a dastardly plot which, after a few months, seemed not to actually be on the cards.

Pretending to be a doctor aside (pretty low key for Janine), she didn’t have that ruthless edge that we know and love.

However, our waiting paid off – right now she is pulling out one of her classic tricks; wanting to destroy Linda by separating her from her child with accusations of neglect.

She has previously carried this one out with Stacey Slater (Lacey Turner), accusing her of neglecting Lily. This sparked one of the most infamous wars of Janine’s tenure, leading to a couple of ‘bush pushes’. Careful when you look that one up online, but the scenes were superb.

Let’s rewind a bit, to young teenage Janine – a stroppy and manipulative youngster who was an endless headache for dad Frank.

One of her first acts as a teen was to seduce Jamie Mitchell to wind up Frank; and it certainly worked. Janine’s smirk when he walked in on them naked in bed proved that her motive was absolutely not a romantic encounter with Jamie.

Her stirring was to drive a rift between Frank and wife Peggy, which was reminiscent of her abhorrent behaviour as a child, during which she would do anything in her power to drive Pat up the wall. The family therapy which followed was a quick and ultimately fleeting fix.

Following her liaison with Jamie, she set about spreading nasty comments about his lack of prowess in the bedroom; such a kind soul.

Her vile treatment of Terry Raymond

One of Janine’s biggest motives in life is money. She’s been destitute and she’s been a millionaire, and everywhere in between.

While the rest of us are attracted to a love interest through chemistry, looks, kindness and humour, Janine generally needs just one thing. A healthy bank balance.

Step forward Terry Raymond; she wasted no time in getting her cash grabbing claws into this older gent.

Moving in with him and trying to seduce him, Janine exploited his kindness and, jealous of any female who entered his life, she constantly ruined any chances he had of romance or happiness.

She even started dressing deliberately as his dead daughter Tiffany, a macabre act which would eventually see Terry launch her out of his home and his life. Understandably.

And Billy also dealt with his fair share of Janine angst

Another person who Janine regularly used and abused was kind hearted Billy. He was attracted to Janine, and often hoped that they could make a go of things – but it was probably best he avoided this. You could ask Barry Evans and Michael Moon about that but they’re a bit too deceased.

Janine flitted between begging Billy, flirting with him to get her own way and outright insulting him, assassinating his character.

Like Terry, he would eventually put his foot down and get rid. However, this was a relationship that would constantly be revisited as Billy was one that could tap into Janine’s vulnerability.

Part of what makes Janine compelling is that her vile treatment of any kind of relationship – be it family, friend or romantic – seems to be a result of years of fears of rejection and being spoilt.

In more exposing moments, we have seen Janine run away, hit desperately sad lows, self harm and suffer from agoraphobia. She hasn’t lived an easy life and, while most of this is of her own making, her warped nature is very often spliced with a damaged woman who has been vulnerable since a young child.

It was eventually Billy who brought Janine back from the edge after she feared leaving the house when she was scarred in a showdown with Laura Beale, but her need to be looked after and wanted by him led to her heart being broken when his affections clearly lay with Little Mo Morgan.

Back to form, Janine them embarked on one of her most infamous relationships, getting together with hapless Barry Evans.

Plotting with criminal Paul Trueman, she once again had her eyes on the prize, which was not Barry’s affection but his wallet.

A naïve Barry refused to believe Janine didn’t actually love him until the very end, a moment when she hammered the point home that he meant nothing to him, by shoving him from a cliff in Scotland and watching him die.

The only tears she would shed were ones of a crocodile nature; exclaiming with pure campness that she wished her late husband had worn slip on shoes. Even more spitefully, she got Barry cremated by herself, deliberately depriving his loved ones of saying their goodbyes.

She got away with the murder and was very smug about it to Barry’s ex Natalie, which is Janine all over.

As Jewish as a bacon sandwich

A few years passed, and soon Pat tracked Janine down to a very unromantic wedding, where she was posing as Jewish, under the name of Judith Bernstein. Exchanging vows with a rich pensioner named David, it was clear that time away from the cursed Square had done nothing to tame her.

Pat would foil her plans by declaring to the congregation that Janine was ‘as Jewish as a bacon sandwich’. And David would react by dying of a heart attack before Janine could make it official.

Her revenge? Saving her stepmum’s number in her phone under ‘Fat Pat’. Always a charmer.

Back on the Square, bitter Janine worked her way through attacking the residents, exacting numerous blackmail plots. Drugging Jack, she forced him to hand over the car lot, or she’d go public with his past misdemeanors.

She then targeted Ian Beale, a man she previously blackmailed after he slept with her, threatening to tell his wife Laura. This time, her tactic was unchanged – after they had sex, she, yep, blackmailed him or she would tell Jane the truth.

Janine and Ryan at war

It’s rare for Janine to fall in love, but she did have genuine feelings for Ryan Malloy, after trying to con him. For a while anyway. They had a pretty destructive relationship, and Janine was initially turned off by his declaration of love.

However, when he almost left Walford, her usually stony heart surprised her, and she returned the gesture.

It didn’t last though, Janine was broken to learn that Ryan was the father of Stacey’s daughter Lily and it all went to pot. Yep, bit of an understatement.

A massive feud exploded, which started with Janine kidnapping Lily and trying to persuade Ryan to leave with them both, and ended with her trying to poison Ryan to death and then stabbing herself during a fight with Stacey, in order to frame her.

Cat and mouse with Michael Moon

Speaking of stabbings, her next marriage ended extremely badly and violently too. After she inherited over a million from her late grandmother, Janine enjoyed lauding herself as a businesswoman.

This brought her into contact with the mysteriously sinister Michael Moon. It became a marriage of conning and scheming, trying to stay ahead of one another and keep a hold of their fortunes.

They had a child together, Scarlett, and after a split, Janine employed the services of Alice Branning as a nanny.

This was a situation that would lead Alice down a very dark and life ruining path. She joined forces with Michael to try and con Janine out of everything. Alice eventually had second thoughts and, when Michael attacked her, she stabbed him.

What she didn’t know was that Janine actually finished him off while she was out of the room, but she had no qualms about letting Alice believe she was a killer, to the point where she was very much prepared to see her go down for years.

After she and Alice were found not guilty of murder, Janine left Walford in 2014 – and it wouldn’t be until seven years later that she would come back.

Now in a relationship with Mick, we are seeing Janine’s fear of rejection and being alone resurface. It’s clear to all that Mick and Linda are endgame and Janine doesn’t like that one bit.

Cue operation ‘get rid of Linda’. This has involved yet more framings – a car crash they were both involved in led to Janine moving Linda to the driver’s seat and letting everyone believe she was drunk at the wheel.

With Linda’s capabilities as a mum under question, Janine capitalized on this and tried to get her separated from Ollie. The same trick she used on Stacey and, to add to the callousness, Janine knows what it feels like, as she temporarily lost custody of Scarlett.

Amid all of this, Janine has yet to get rid of Linda but with her scheming increasing, the feud with has really heated up, with showdowns and extremely barbed comments. And one hell of a punch from Linda.

It’s Janine at her worst – and best. Judging by her past actions, Linda should be very, very scared.

And she should absolutely invest in some slip on shoes.