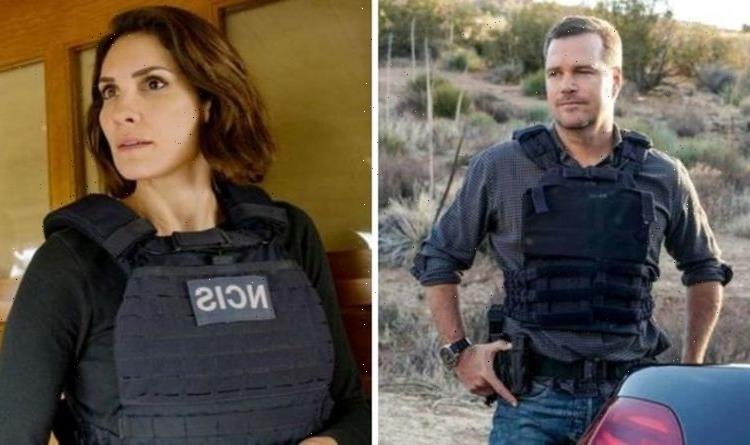 Ahead of the release of the upcoming fourth episode, CBS released a number of sneak peek clips which hinted at various nail-biting scenarios. NCIS LA fans could see Callen (played by Chris O’Donnell) and Kensi (Daniela Ruah) at the centre of a possible hostage situation.

In the tense teaser clip, Callen and Kensi were in the middle of a car chase, with the vehicle in front of them shooting a rifle in their direction.

As Callen attempted to pursue the car, Kensi loaded her gun in preparation to shoot when she remarked: “This is awkward, never thought I would die in a hearse.”

Right after he responded, “I don’t plan on letting that happen,” a van appeared for a side road, attempting to take them out.

In the next scene, the enemy car they were chasing stopped in the middle of the road, with the cooperating vehicle behind the officers completely barricading them.

While Callen and Kensi remained in the hearse, the armed drivers and passengers of the other cars stepped out of their vehicles and approached them.

“This is why I don’t make plans,” Callen answered.

With the officers in a very hostile situation, episode four could see them forced out of the hearse and into the back of the van.

While it’s yet to be seen why they were originally chasing the car, or even in a hearse this teaser suggests Callen and Kensi could end up being kidnapped and held hostage.

The theories are yet to be confirmed, however, the car chase could be linked to Callen’s latest mission of seeking Katya (Eve Harlow), a known Russian spy.

If this is the case, she is bound to stir up a heap of trouble for the NCIS team, as she has done so in the past and successfully got away with it.

As they approached potential suspect David Milton (Chad Addison) and introduced themselves as NCIS, the target made a run for it.

As the two officers split up to try and catch him, Devin was able to get a hold of him but he wrestled out of his grasp and took off.

Thankfully, Sam was there to throw him onto the ground, however, David retrieved a baton from his boot and attempted to beat the agent with it.

Sam was able to fight back, tackle the weapon out of his hand and use it against him, which resulted in the suspect being wounded on the ground.

Devin came round the corner in time to witness the takedown and quipped: “I guess that’s another way to make an introduction.”

According to a synopsis released by CBS for episode four: “Kilbride enlists NCIS to help find a truckload of stolen guns.

“The assignment becomes more challenging when their suspect, the son of a mob boss they believe was planning to sell them, is found dead, on NCIS: LOS ANGELES.”

This mission will also be a chance for Kilbride (Gerald McRaney) to prove himself worthy of his new role as Operations Manager, replacing the beloved Hetty Lange (Linda Hunt).

Fans will have to tune in to see how Callen and Kensi find a way out of a possible hostage situation, and if Kilbride will finally gain the trust of his team.

NCIS: Los Angeles season 13 airs Mondays on CBS in the USA. A UK release date is yet to be announced.