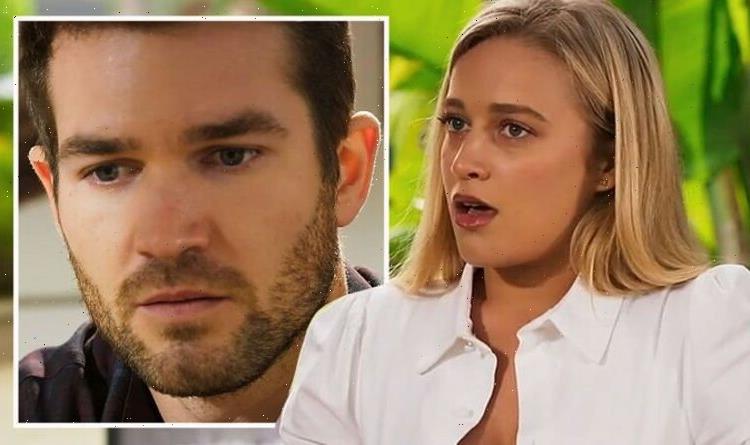 Ned Willis (played by Ben Hall) and Roxy Willis (Zima Anderson) were introduced as the new generation of the iconic Neighbours family, headed by their stepmother and auntie respectively, Terese Willis (Rebekah Elmaloglou). The youngsters have been at the centre of some of the Channel 5 soap’s most high profile storylines in recent years, including near-death experiences and many love dilemmas. However, alongside Kyle Canning (Chris Milligan), the pair are going to be making their exits in the coming weeks as their time on the show is tied up.

With production ending in June and the final episodes of the beloved programme airing in the UK this August, writers are having to think about how they are going to conclude many residents’ stories.

At the moment, it’s not been reported Terese is going to be making an exit as her toxic relationship with Paul Robinson (Stefan Dennis) continues.

However, she will be bidding farewell to her stepson and niece very soon as they both make plans for their future away from Ramsay Street.

According to the latest reports, the actor who plays Ned, Ben, has come to the end of his contract with an insider telling Digital Spy the character will be bidding goodbye to the place he has come to call home.

The exact details surrounding his exit have not been confirmed as it seems bosses are wanting fans to be surprised by his departure.

In recent weeks, viewers have watched as his relationship with Amy Greenwood (Jacinta Stapleton) has started to slowly burn out.

At the same time, he seems to have developed a bond with Harlow Robinson (Jemma Donovan) and the pair are starting to explore this further.

It seems he will be battling whether he wants to start a new romance with another love interest or pursue a future away from Erinsborough.

The youngster is an avid fan of art and he painted the memorial of Sonya Rebecchi (Eve Morey) on Ramsay Street to remind her young children she would always be with them.

Could he, therefore, be given a scholarship to perfect his skills in a school in a different location of Australia or will he be scouted to paint a piece in another part of the world?

We are so sorry

As for his cousin, Roxy, it seems wanting to start a family could be the reason she and her husband Kyle decide they’re going to leave.

In recent scenes, the pair have discussed having a baby after getting married earlier this year and following Kyle’s battle with testicular cancer.

Needing an operation to remove his testicles, Roxy’s husband managed to give a sample of his sperm to be used when he and his wife were ready to have a child.

However, if this turns out to be unsuccessful as they attempt IVF, the pair could be looking at alternative options of having children.

This could include adoption and they could decide they are going to take on the parental responsibilities for the children of Naomi Canning’s (Morgana O’Reilly) late partner.

It was revealed a couple of weeks ago Sheila Canning (Colette Mann) had flown to America to help her daughter look after the deceased’s children.

As he had no other family, Naomi has been left as the sole carer of the children but Roxy and Kyle could take them off her hands.

Knowing Naomi is struggling but still wants to be a part of the children’s lives, the couple could agree to become the youngsters’ parents.

This means Naomi would be able to keep an eye on them as an auntie figure, rather than have the responsibility on her shoulders.

Settled in America, the couple could agree they don’t want to uproot the children so they will fly out there to start a new chapter of their lives.

She confirmed the news during an appearance on Isolation Interviews and Digital Spy is reporting the couple will leave on-screen in Mid-April.

This will be just a few short months before the finale and it is expected thereby many more exits over the next few weeks.

But the departure of the Willis family members means the iconic family will be no more as Terese tries to figure out on her own what she wants from her turbulent marriage.

It is likely she will play a part in her family’s exits, whether it be to say goodbye or to offer advice on what they should do.

The official Twitter account for the show posted a statement from the soap’s bosses confirming the programme would be brought to an end.

It read: “We are so sorry to say that after nearly 37 years and almost 9,000 episodes broadcast we have to confirm that Neighbours will cease production in June.

“Following the loss of our key broadcast partner in the UK and despite an extensive search for alternative funding, we simply have no option but to rest the show.

“To our amazing, loyal fans, we know this is a huge disappointment, as it is to all of us on the team.

“We thank you for all your messages and support and promise to end the show on an incredible high. From here on, we are celebrating Neighbours,” it concluded.

Neighbours airs weekdays at 1:45pm and 6pm on Channel 5.