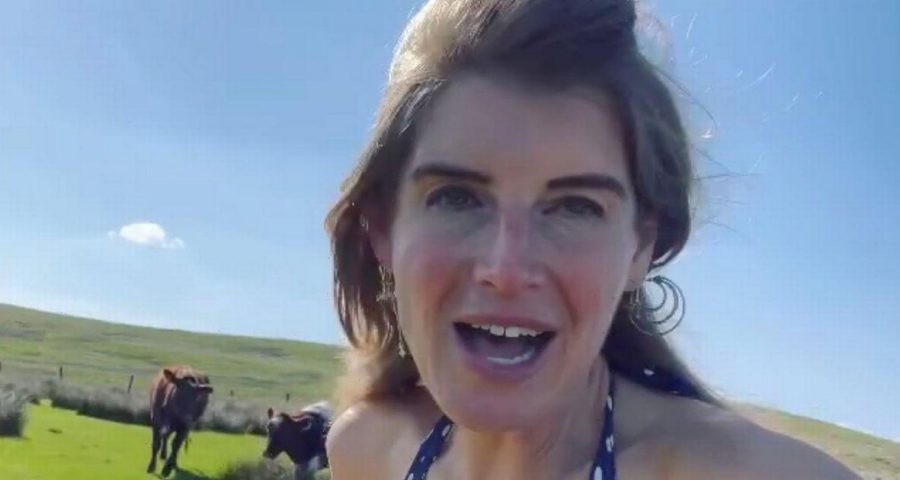 Our Yorkshire Farm star Amanda Owen looked every inch a stunning Shepherdess as she got to work over the weekend wearing a bikini.

Wearing a blue polka dot bikini and gold hoop earrings, the Channel 5 beauty could be heard shouting "c'mon c'mon" to her herd of cows.

Speaking to her followers in the footage, Amanda, 46, said: "We are moving the cows this morning and putting them into some remote pastures, away from where people walk, so they can have peace and quiet."

Amanda captioned her recent social media update: "Moving some of the cows to their outlying Summer grazing pastures."

Unsurprisingly, her recent work attire caught the attention of her 335,000 followers, with some fans leaving a flirty message for the star in the comment section.

One fan penned: "You're the most glamorous shepherdess!"

Another added: "I love how glam you look."

While a fourth follower said: "Gorgeous."

Amanda shot to fame after appearing on the hit show Our Yorkshire Farm, which follows the lives of her family who live I'm a farmhouse which sits on a 2,000 acre plot of land.

The Owen family is made up of Amanda, her husband Clive, and children Raven, Annas, Violet, Edith, Clemmy, Nancy, Reuben, Miles and Sidney.

Amanda was recently forced to address rumours that the show was suddenly dropped.

Episode eight caused confusion as it suddenly disappeared from the TV schedule despite the end of the previous episode teasing it.

There's been no concrete date set for episode eight leaving some viewers concerned the popular series had been dropped by the broadcaster.

Fans recently reached out to Amanda on social media in the hope of getting some answers.

A viewer wrote: "Not impressed to hear that Channel 5 has dropped the show. #OurYorkshireFarm is the only show worth watching imho."

But Amanda quickly responded, writing: "They haven’t dropped it.

"We will be back with a new series later in the year."