Starz series Outlander concluded recently with Jamie Fraser (played by Sam Heughan) rescuing his wife Claire (Caitriona Balfe). During her abduction by Lionel Brown (Ned Dennehy) and his band of men. She was brutally raped and beaten by her captors apart from a few.

Claire also discovered a time traveller among the men in the form of Wendigo Donner (Brennan Martin).

Wendigo went to speak to Claire as they both realised they were from the future.

She begged to be released, promising Wendigo safe passage back through the stones and gemstones.

However, Wendigo was fearful for his own life and refused to help her. 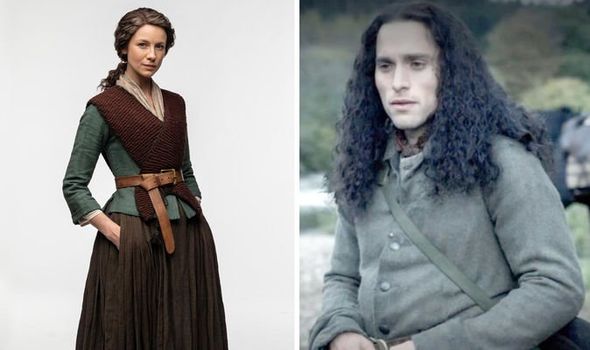 When Jamie eventually rescued Claire, he killed all of the men but Wendigo managed to escape.

Season six is likely to see the character return in some form or other.

From the sounds of it, Wendigo travelled through time with the same group as Otter-Tooth/Robert Springer (Trevor Carroll) and tried to change history stop the genocide of the Native Americans.

He was part of the Montauk Five who belonged to the American Indian Movement and all of whom vanished in the 60s.

The brief exchange in the season five finale titled Never My Love suggested Wendigo wanted to go back to the future but didn’t know how to.

In Diana Gabaldon’s Outlander novels, Wendigo will be returning to the story when he goes to River Run.

He will seek out Brianna MacKenzie (Sophie Skelton) in the hopes of procuring gemstones for his travel back to the future.

Later, he will head to Fraser’s Ridge where he will demand Jamie and Claire give him the previous stones needed for his journey.

But his plans will go awry when he accidentally starts a fire at the Ridge which claims his life.