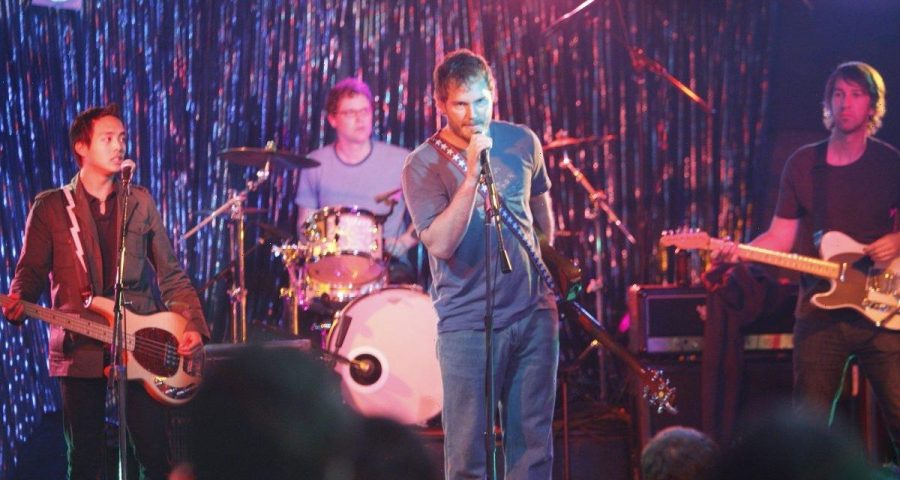 Mouse Rat was Andy Dwyer (Chris Pratt)’s band on Parks and Recreation. When Andy fell into the pit in season 1, they recorded a song about it to raise awareness and funds for Leslie Knope (Amy Poehler)’s project to turn it into a park. Now, Pratt reveals the true inspiration for the Mouse Rat song: Guns N’ Roses.

Pratt was a guest on the Parks and Recollection podcast on Oct. 18. When Pratt and Parks and Recreation writer Alan Yang discussed “The Pit,” Pratt named the Guns N’ Roses song that provided the melody.

Andy was the lead singer of Mouse Rat. So, Pratt went into “The Pit” from Parks and Recreation, and then the actual Guns N’ Roses song.

The prolific writer of ‘Parks and Recreation’ Mouse Rat songs

Pratt got all the glory for Mouse Rat but he credits Mark Rivers with giving him the material. Rivers wrote many of the songs and played drums in the band featured on Parks and Recreation.

“In fact, if you go into the lyrics of the songs which I think he would get credit for writing for the most part, they’re brilliant pieces of comedic writing,” Pratt said. “I think there’s one song, I don’t know if it was a Mark Rivers, but one song is called ‘Two Birds Holding Hands.’ It says, ‘Two birds holding hands, so much better than one.’ It’s like the idea that birds are holding hands, and then it’s like we could fly through the ocean. Really good bad lyrics.

Was every Mouse Rat song based on Guns N’ Roses?

Pratt confided that the Mouse Rat songs didn’t have that much variety. If they were all similar, would that mean every song in Parks and Recreation is based on “Paradise City”?

“[They] were essentially all pretty much the same song,” Pratt said.

Yang explained further. Rivers did rely on the same chord progression for many Mouse Rat songs.

“He’s a really funny guy and he’s a great musician and he wrote all these songs, really complicated, G, C, D type songs but they’re pitch perfect for what it is,” Yang said. “Mark Rivers was the drummer in Mouse Rat and he wrote pretty much all the songs. I think he recorded a lot of the tracks. He’d record a scratch track and Chris would sing the actual vocals.”

Mouse Rat lives on after ‘Parks and Recreation’

Parks and Recreation released an album of all the Mouse Rat songs. Pratt said they became a real band, even though they only played for the show.

Yang also joined the band, but not by choice. He thought he’d grin and bear it once.

[Parks and Recreation co-creator] Mike Schur made me join the band because he was like, ‘You were in a punk rock band when you were a kid.’ I played in a band when I was 17. He’s like, ‘It’ll be really funny. You’re just going to be in this one episode. You’ll just be in this one episode, you’ll play in the background, you’ll come to set this one time and then Chris Pratt will sing. It’s easy.’ Then of course Mouse Rat is in 15 episodes. It’s like you gotta keep going to set, keep learning the songs. Pratt’s right. The thing that was fun about it is we would actually learn the songs and then we would play them at the wrap party every year. Whatever five Mouse Rat songs we learned that year we would play at the wrap party.