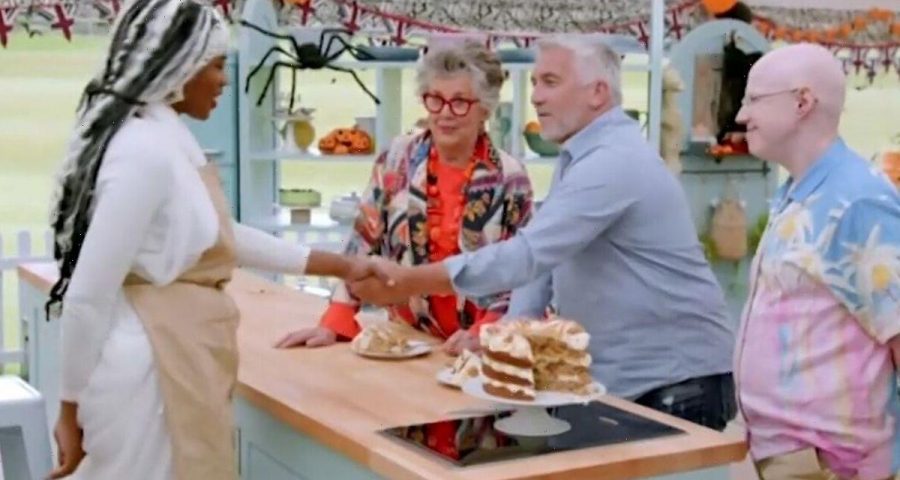 Channel 4’s hit competition series The Great British Bake Off returned to screens with another episode of the bakers battling it out to impress judges Paul Hollywood and Prue Leith. However, viewers were left annoyed and complained Paul was giving out too many handshakes.

The Great British Bake Off first premiered in 2010 and introduced the stern chef Paul Hollywood.

Although he was hard to please, the bakers would get their seal of approval from him with a handshake.

Throughout the years, Paul’s handshakes became an iconic part of the series, with bakers aiming to receive one.

Often the recipient would breathe a sigh of relief as it was an inkling of their fate in the competition.

This week Bake Off returned with Halloween week and the bakers were challenged with a host of difficult desserts to create.

The bakers were first tasked with creating an apple cake which had to be exquisitely decorated with the use of fresh apples.

As Paul and Prue went around the table and tried the desserts, Paul was pleasantly surprised and gave a handshake to Maxy.

After he also gave Syabira a handshake, viewers took to social media with their disapproval.

Despite the backlash, other viewers were happy for Maxy and Syabira and took to Twitter to share their glee.

A surprised @GarethLeitch stated: “I was just thinking there hasn’t been many handshakes so far and then we got two!”

This included @TheMizzCCB who wrote: “Syabira and Maxy with the first handshakes of the season!!!! Super proud of them.”

After receiving a handshake Syabira shared her excitement with host Noel Fielding and admitted: “I haven’t washed it since then.”

She added: “I was surprised, I didn’t know and was just like ‘thank you.’”

As the bakers began working on their technical challenge, Paul and Prue were inspecting their work when they noticed Syabira’s hands shaking with nerves.

After she joked if Paul was giving her another handshake before the results, he stated: “You’ll be fine, you’ve done well so far.”
Paul reassured her: “You’ve had a really good week.”

Great British Bake Off airs Tuesday from 8pm on Channel 4.