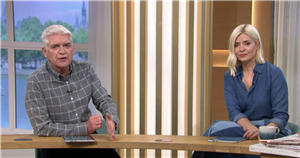 This Morning star Phillip Schofield has claimed Prince Harry and his wife Meghan Markle are "damned if they do, damned if they don't" as a new row has erupted over their potential UK return.

It comes after a source claimed that the couple were planning to christen their daughter Lilibet in the US instead of returning to Windsor Castle to have her baptised into the Church of England.

If she did return to the UK, she would be following in her brother Archie's footsteps, who was christened at the historic venue.

"You wonder whether if they had come over, people would have said, 'That's unnecessary travel!'"

Camilla added: "With this and the fact that the couple isn't coming over for the event to mark Diana on what would have been her 60th birthday in the summer, and the statue, it's just interesting that Harry and Meghan don't have any immediate plans to come and see the Queen and introduce her to these great-grandchildren.

Prince Harry did, of course, reunite with his brother William for the unveiling of Diana's statue earlier this year – but a heavily pregnant Meghan stayed in America.

He also returned to the UK for the funeral of his grandfather, Prince Philip – again, without Meghan.

Tom Swarbrick, one of the programme's regular news reviewers, agreed with Phil, as he said: "I just think it's up to them. She's their daughter, let them decide.

A palace insider revealed to The Telegraph on Monday: "There will not be a christening in the UK. It is not happening."

Another source said it would be "highly unlikely".

It is instead expected that Lilibet will be christened in the Episcopal Church of the US.

This Morning airs from 10am weekdays on ITV.