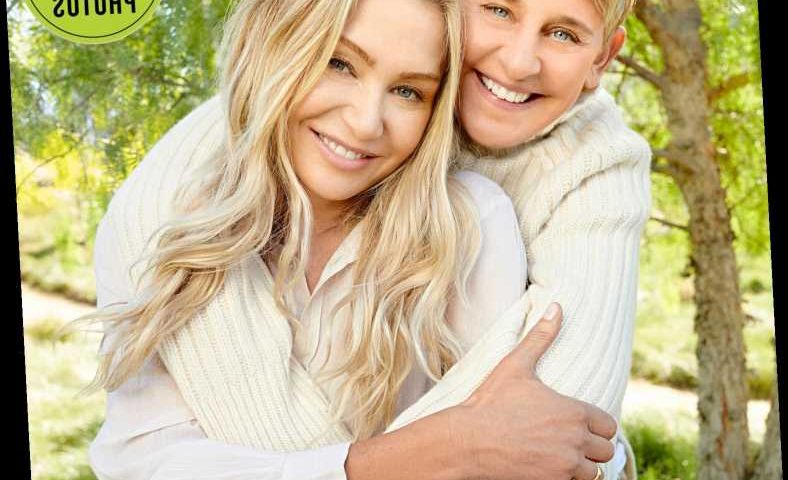 After the two were introduced at a Rock the Vote concert, de Rossi, 48, recalls running after DeGeneres, 63, backstage. "I remember thinking that she was the coolest, most fascinating, beautiful, funniest person I'd ever met," she tells PEOPLE in one of this week's cover stories. "But I, at the time, was closeted; I really wasn't comfortable with my sexuality. I just knew that being with her would be a bit of a thing for me, so we didn't get together after that for about three years."

At the Big in '04 VH1 honors, "We saw each other and started talking, and that was it," says DeGeneres. "She opened up and said she'd been thinking about me. And it surprised me. It was a big deal for her to be seen with me. The very first time we were photographed together was when I joined her at the Golden Globes after-party. And that's when everyone knew that we were together."

For more on Ellen DeGeneres and Portia de Rossi, pick up the latest issue of PEOPLE, on newsstands Friday, or subscribe here. The two quickly became one of the highest profile LGBTQ couples, and de Rossi gives full credit to her wife, who very publicly came out in 2001, for supporting her through the transition.

"I just got to a point where I chose love over anything else. This was a once-in-a-lifetime feeling," says the actress, who married DeGeneres in 2008 after same-sex marriage was legalized in California. "And Ellen really did help me through it just by being there and making me feel more comfortable about who I am — like there was nothing wrong with being gay. I think that's the first time in my life I felt that was true." "It's hard because you'd never want to be a representative for millions of people," adds DeGeneres. "Everyone is unique. We just happen to be two openly gay women, and this is how we live. But it's something that I'm very proud of, if I can help people."

Watch the full episode of The Love Issue: Ellen DeGeneres and Portia de Rossi on PeopleTV.com or the PeopleTV app. So what have they learned about love? "The more you love something, the more you get back," says DeGeneres. "I've been in a lot of different relationships, and you really can have all these qualities that seem like they're right, but you can't force it."

Adds de Rossi: "Love is everything. Because there's nothing in the world that would be enjoyable without it. And real love never stays stagnant. It never stays the same. It's always changing and growing. You just have to kind of go with it."