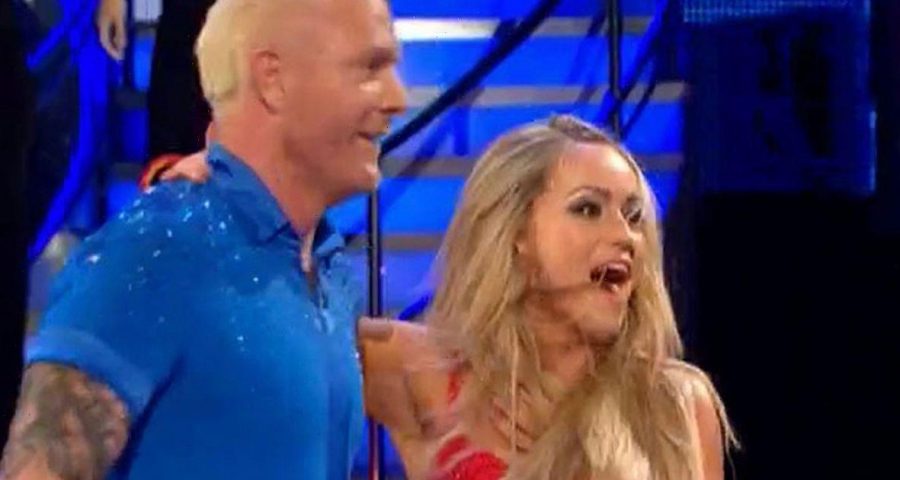 Strictly Come Dancing is as known for its fabulous outfits, full of sequins, glitter and floaty skirts, as it is its dancing.

However, with the stunning figure-hugging costumes comes the opportunity for wardrobe malfunctions.

Several celebs over the years have had accidents that led to them revealing a little more than they intended, with plenty of underwear flashes.

While others have been blinded by a skirt over their head or had to keep dancing while their dress threatened to trip them up.

The true mark of a professional however, is managing to keep going and deal with the blunders as they come and without losing marks!

We take a look back at the biggest wardrobe fails over the 18 series.

Dancing with partner Brendan Cole to the iconic Love Lift Us Up Where We Belong, Victoria suffered a classic wardrobe malfunction when she got caught up in her ballroom gown.

As Brendan twirled her around, Victoria’s dress blew up and revealed a bit of her toned derriere.

But Victoria dealt with with the mishap like a true professional, as she carried on with her routine while managing to pull her royal blue ballgown back to the right place.

She received support from fans at home, including Brendan’s wife Zoe who took to Twitter to say: “Can we just get rid of the stupid floaty bits of costume please!! Gaaaaahhhhhh! Great job Vic and Bren. Very proud.”

While some contestants can be upset by a wardrobe blunder, Alison Hammond found herself giggling away hysterically after her mishap.

Luckily the pro dancer smoothly pulled it away as if it was part of the choreography.

As the pair left the dance floor, Alison was seen laughing loudly as Aljaz joined in, and Darcy Bussell giggled while holding her head in her hands.

Chelsee Healey’s Tango back in 2011 ended in tears after a wardrobe malfunction took place on the dance floor.

While dancing with partner Pasha Kovalev, the young star lost her footing as she frantically tried to stop her dress from falling down and reveal more of her ample cleavage.

She couldn’t stop herself from getting upset after Bruce Forsyth asked her what was wrong.

Judge Alesha Dixon attempted to reassure her, saying: “You have nothing to cry about, my darling. It did not distract from the dance.”

But it was a comment from host, Tess Daly, that was needed to perk up the actress: “Can I just reassure you, we saw absolutely nothing.”

Chelsee later took to Twitter to tell her fans: “Mortified I got upset on strictly! Just upset that I let @PashaKovalev down! He's worked so hard and I messed up!”

Ola Jordan was left red-faced when her partner was announced as Iwan Thomas and he picked up her and spun her round, only for her breasts to almost fall out and her skirt to be torn.

After he put her down, Ola was seen adjusting her lacy red top, trying to cover up and hide the wardrobe malfunction.

But she laughed off the incident like the professional she is, tweeting: "Ha ha! @Iwanrunner Brilliant.

“In this 1 second he ripped my skirt, broke my nail and my boobs popped out!! This is going to be great series."

Following an energetic routine to Turn the Beast around with celebrity contestant Sunetra Sarker, Brendan Cole gave viewers an eyeful when his trousers split.

Awkwardly shuffling over to Tess to get the judges feedback, she asked “Why are you walking like that?”

Turning to the camera, he flashed the tear around his crotch and a stunned Tess exclaimed: “Oh, I see! We’ve had a wardrobe malfunction. Nothing to see here, folks!”

Head judge Len at the time cheekily quipped: "I think I saw your bongos!"

While dancing with partner Kevin Clifton, the journalist lifted her skirt to reveal a nude coloured bodysuit underneath.

Viewers had home were taken aback and took to Twitter to question whether the star had forgotten to put her underwear on ahead of the show.

Another joked: “Why was Stacey flashing her Dooley!?”

Professional dancer Janette Manrara was left blushing in 2019 after she was shown her awkward wardrobe mishap on It Takes Two.

As she danced with partner Will Bayley, her dress got caught on the Paralympian’s head and temporarily blinded him during the pair’s final lift.

Will carried on and eventually managing to lift the fabric off his face.

Janette admitted that she didn’t even know the blunder had occurred, saying: “I didn't know it happened on the night.”

“I remember because I said to him, ‘No matter what happens, when we get to that last lift, you stand steady and you walk forward with power and strength,’ and he did exactly that.”

Will explained: “It went over my head and I was like, ‘How am I going to style this out?’”

Strictly fans were in left in shock after Diane Buswell revealed her knickers live on air last year.

The 32-year-old was dressed as Marge Simpson while she and partner Max George performed a dance to the Simpsons theme tune.

Mid-performance she sat on a chair and spread her legs revealing her blue pants to the entire nation.

Some viewers were unimpressed by the flash, with one fan saying: "The real Marge would never show her knickers like that.”

But it was her wardrobe malfunction that had viewers on the edge of their seats in fear.

Within seconds of starting her routine, Clara's heel had snagged the bottom of her net skirt.

As she started to move around the dance floor, it trailed along the ground, and fans feared it would catch in her heel again and trip her up.

Taking to Twitter, one wrote: "That bit off Clara’s dress is making me nervous.”

Another tweeted: "omg that rogue bit of Clara's dress is giving me anxiety."

Get the latest updates on all the things TV and showbiz by signing up to the Daily Star showbiz newsletter .