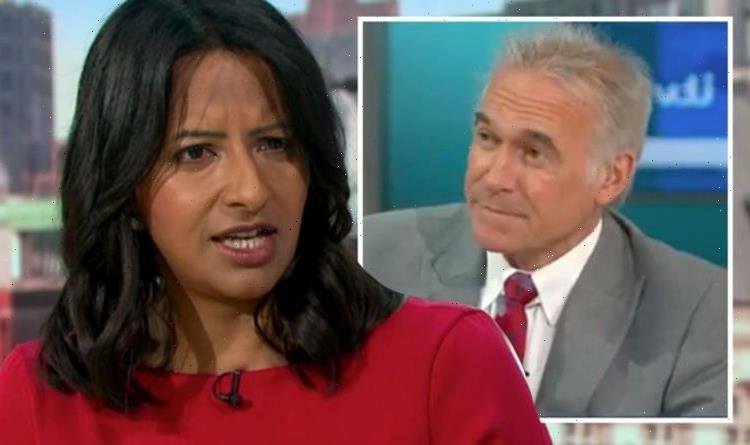 Good Morning Britain: Ranvir Singh is worried she won't be able to go on holiday

Ranvir, 44, was on hand to host Good Morning Britain with Charlotte Hawkins, 46, and the pair were joined by medical expert, Dr Hilary, 68. With the government set to update their traffic light system for international travel on Thursday afternoon, the trio discussed how some hotspots in the UK should be put on the red travel list due to increasing cases of coronavirus. However, with the former Strictly Come Dancing contestant set to take a break from the ITV show in the coming weeks to enjoy a holiday in Cornwall, she realised she might not be able to go if cases don’t drop.

It was Charlotte who raised the issue about Ranvir’s holiday as she said: “You’re off to Cornwall, you might need to keep an eye on that.”

Ranvir replied: “I’m hoping there is no traffic light system for Cornwall apart from some heavy traffic I imagine.”

“So if Cornwall was a country, it would be on the red list,” she declared as Ranvir admitted she was quite “worried”.

She explained: “I am booked in. I know the Cornwall tourist board has said don’t come unless you’re booked in.”

Dr Hilary offered his warning to his co-star as he explained: “The number of cases has doubled in a week.

“We’re seeing a similar situation in Cumbria, doubling in a week, and tourism is undoubtedly part of the problem.

“There was the Boardmasters Festival [in Cornwall] which is linked to 4,700 cases to the 50,000 young people going to that festival.”

I am quite worried

“We’ve got the Reading Festival coming up and there are high numbers of cases in Scotland,” the medical expert continued.

“So as immunity wains, it could reduce to 50 percent protection by the winter for those who were first vaccinated – the most vulnerable – so this is of concern.”

Ranvir has continued to host the programme, as well as present chat show Lorraine, throughout the summer as her colleagues have enjoyed a well-deserved break.

Therefore, her frustration over cancelling the holiday to Cornwall for the umpteenth time was evident on Thursday morning.

Taking to Twitter, viewers reacted to the conversation as one wrote: “Here we go ! Term time lockdown looming as predicted. And giving jabs to children without consent should be illegal.”

Another posted: “Stop with the doom and gloom, cases are not infections, pack it in trying to force another lockdown.”

Whilst a third remarked: “Sacked off a staycation and currently in Majorca for the second time in one month! The thought of going to Cornwall gives me the sweats!”

“The government wanted us to take staycations and stopped us all from travelling easily to ‘safe places abroad’ what do they expect to happen?” a fourth opined.

Deputy director of public health for Cornwall and the Isles of Scilly, Ruth Goldstein, has issued a statement on the situation in the district and the impact of the Boardmasters Festival.

“We don’t know whether they have been camping, or to events on the beach, or to parties in the town put on by Boardmasters.

“Of those people, three-quarters of them are aged between 16 and 21, which is exactly the profile of the people who we know attend the festival.”