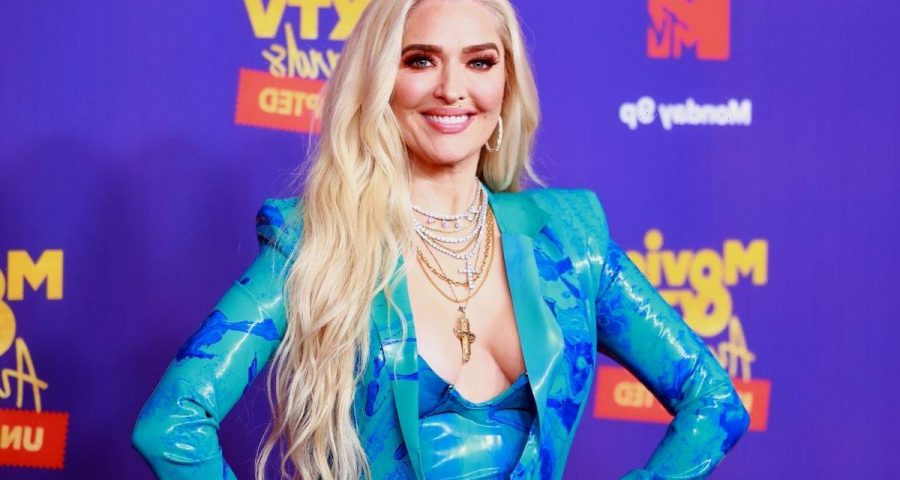 Real Housewives of Beverly Hills star Erika Jayne is in the middle of a very public divorce. She split from her husband of more than 20 years, Tom Girardi, last fall after his law firm got caught up in a nasty embezzlement scandal.

The drama is currently playing out on season 11, and Erika isn’t getting any favors from RHOBH producers. They’ve made it very clear where they stand in her divorce proceedings.

During a recent episode of RHOBH, Erika seemingly got into it with her co-star Garcelle Beauvais. The Xxpensive singer accused Garcelle of “betraying” their friendship when she revealed in front of all of their castmates that Tom still calls Erika amid their divorce.

But according to an insider, Erika wasn’t mad at Garcelle. Instead, she was mad at RHOBH producers. She felt like they “pulled a fast one” with their edit of the episode.

“They cut it and paste it in a way to make it look like she was upset, but she was actually mad that Garcelle was told what to say three times and she took the bait,” the insider told Page Six. “They had three different conversations about the same subject.”

The source explained that what producers didn’t show in the episode was that Erika and Crystal Kung Minkoff had a private conversation. But, producers heard them talking through their mics.

“When they got in the car, producers said they overheard it and asked Crystal to ask [Erika] on camera. Bravo didn’t want to do the fourth wall. They pulled a fast one,” the insider revealed.

The source added that Garcelle was “actually never a part of the conversation” that Erika and Crystal had. This is why the footage of the women walking with their backs turned to the camera included the hot mic voice-over.

What really went down behind the scenes first became an issue when Erika and Garcelle’s co-star Lisa Rinna took to Instagram after the episode aired.

“Dang it…I wish they had shown the screaming fight between the producer and Erika last night on the show in La Quinta. Now that would have been epic TV. Too bad. Bravo Bravo F–king Bravo,” Lisa wrote. “I’ll get in trouble for this in 5,4,3,2,1.”

Producers have made it clear where they stand

Producers of Real Housewives of Beverly Hills may have given Erika an edit she didn’t like during a recent episode. But that’s the least of her worries.  According to The Daily Mail, producers are “prepared” to turn over “unaired footage and multimedia,” if requested.

“Producers are aware the legal case is only going to intensify and are prepared, if asked by the courts, to help the discovery process by releasing unaired footage and multimedia featuring the Girardis,” a source claimed.

“Producers have been advised by their legal team they may be forced to turn over any footage or audio which may help the court get a clearer picture of the case.”

Where did the wealth that Erika flaunts on ”Real Housewives of Beverly Hills’ come from?

Tom’s embezzlement scandal is the result of some terrible accusations made in the wake of the 2018 Lion Air crash. His law firm Girardi Keese represented the victims’ families in their lawsuit, and he negotiated a multi-million-dollar settlement.

But instead of paying out that settlement to the plaintiffs, Tom reportedly kept that money. Some believe that settlement money is the source of the wealth that Erika’s been flaunting on Real Housewives of Beverly Hills.

“Producers are on Erika’s side because they have had, up until this point, a good working relationship with her, but they want to help the case and do what’s right,’ the source dished.

“Producers are on Erika’s side because they have had, up until this point, a good working relationship with her, but they want to help the case and do what’s right,’ the source dished.