Each day progressive activist Ady Barkan, who is battling the debilitating and incurable disease ALS, faces a difficult reality: “I got a lot to say and not a lot of time left to say it in.”

Barkan, 37, makes that observation in Not Going Quietly, the new documentary about his life and work that opens today in theaters in New York and L.A. The film follows Barkan on what, under the circumstances, is an almost super-human task—a cross country tour in 2018 aiming to flip the House from Republican to Democratic control, and to spotlight Republican attempts to gut medical coverage for those who need it most.

The grueling trek of 30 Congressional districts threatened to worsen his health, but Barkan insists in the film, “Movement building is invigorating for me. It allows me to transcend my body and be part of something bigger than myself.”

The Greenwich Entertainment release, written and directed by Nicholas Bruckman and written and produced by Amanda Roddy, documents with startling intimacy Barkan’s physical vulnerabilities as his ALS progresses, paralyzing his muscles and robbing him of his capacity to vocalize. Among the most moving scenes are ones with Barkan and his wife, Rachael King, a professor at UC Santa Barbara, and their young son Carl, a charming toddler who sits contentedly on his father’s lap as Ady operates his motorized wheelchair. 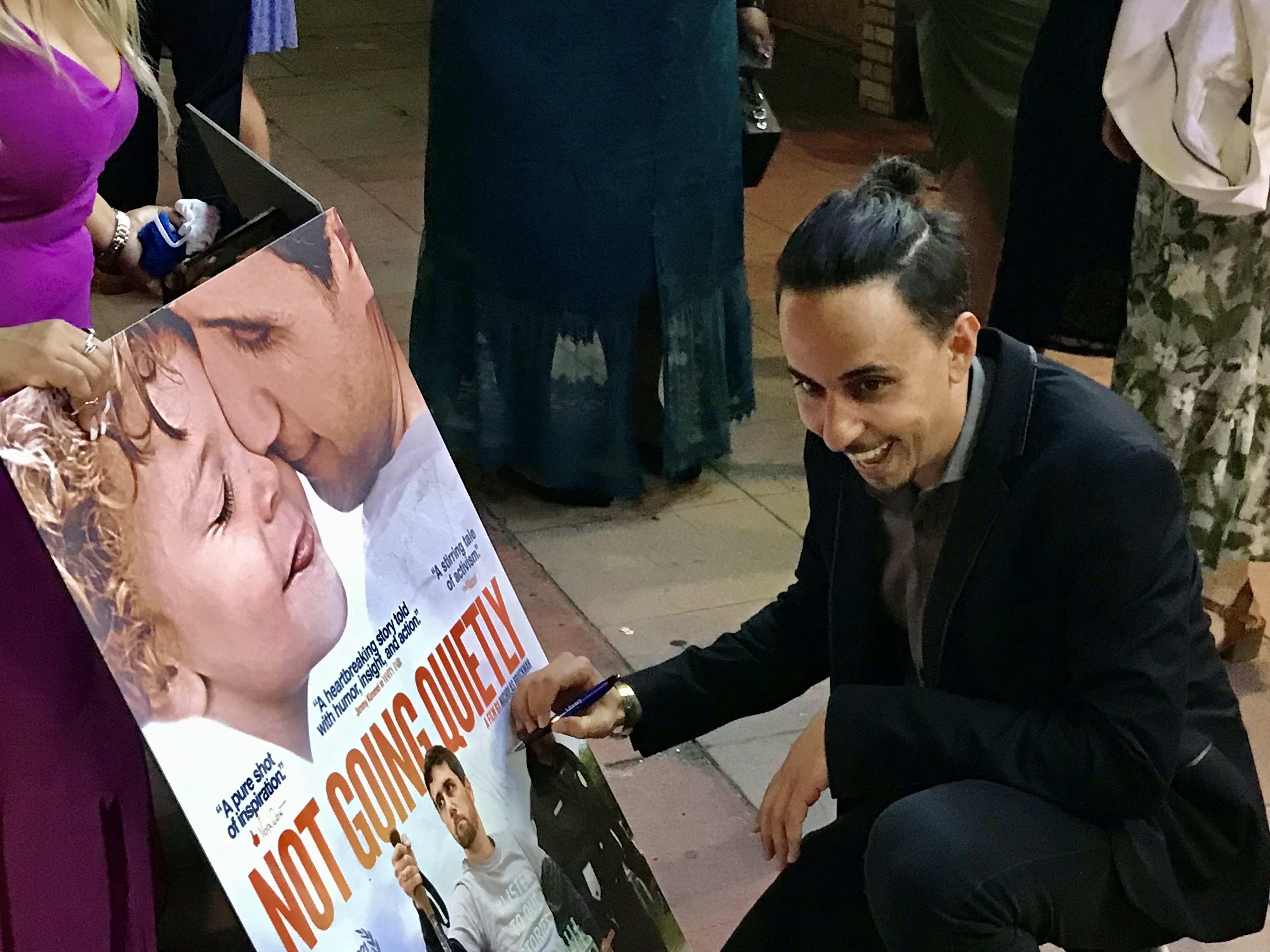 Bruckman met his subject after agreeing to shoot a video of Barkan in support of his political efforts. This was shortly after a video of Barkan—shot by his friend, political strategist Liz Jaff—went viral showing him confronting Sen. Jeff Flake of Arizona on board a plane over his apparent support for Medicaid cuts.

“[I] flew out to Santa Barbara, met him, and the very first thing I ever shot with him is in the movie when he’s topless and says, ‘Let’s get going.’ Rachael’s fixing his hair,” Bruckman recalled during a Q&A Thursday night following the film’s L.A. premiere. “And that was the moment I had an inkling there was something more to this story because of the resilience and grace and humor with which Ady has turned this disease into a weapon to create a better world for his son and for all of us.”

Bruckman said he and his producer Roddy felt under the gun to get started on a feature documentary, because of Barkan’s declining physical condition. 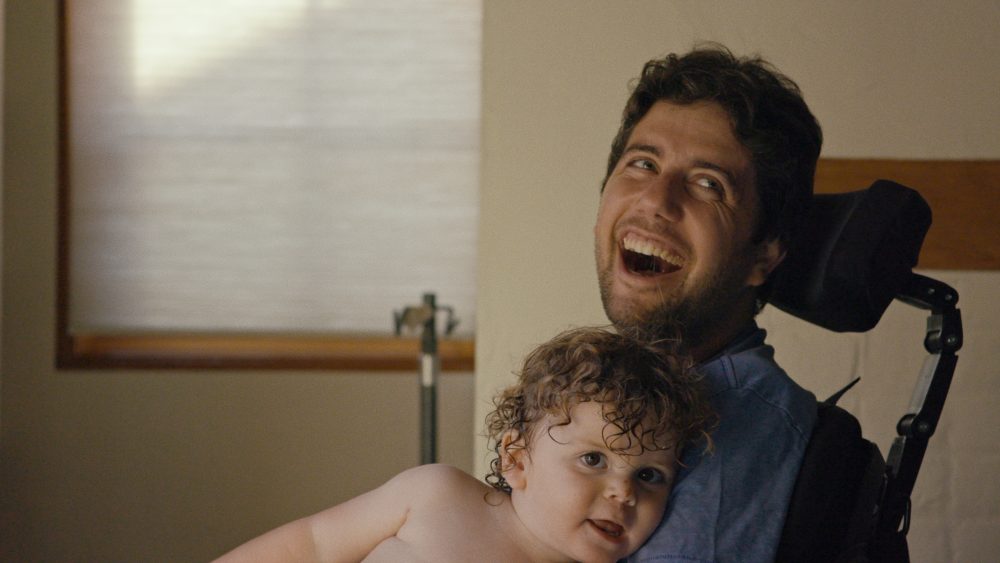 “There wasn’t a lot of time, because he only had six months left to speak. We still had to get Rachael on board, though,” Bruckman said. “For some reason they said yes, I think in hopes, maybe, that one day Carl will see the movie and see all the amazing work Ady has done.”

The tender moments of Barkan with his family, and being cared for by his best friend Nate Smith, allow the audience to connect emotionally with the stricken activist. That, in fact, has been the key to Barkan’s success in changing minds on political questions—a gift for framing issues in ways that allow people to see the personal impact of policies. Like losing your health care coverage when your life depends on it. 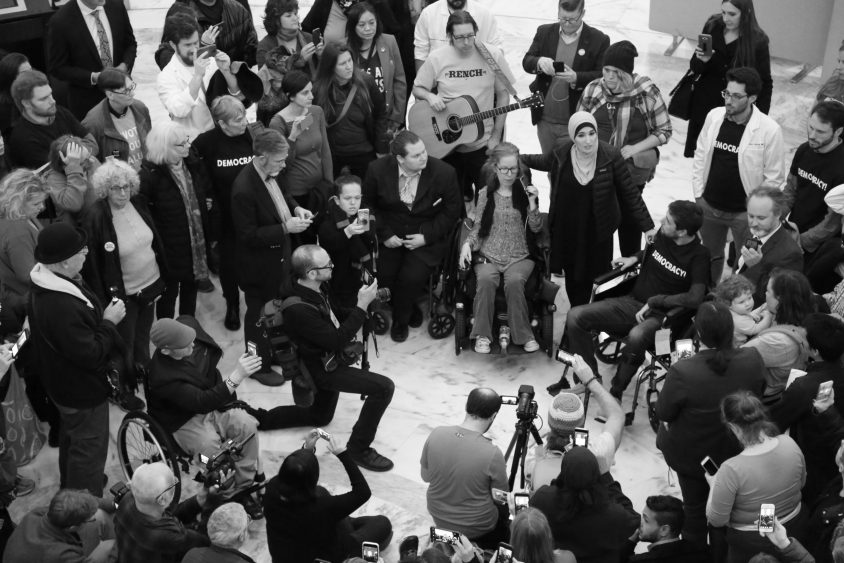 “That’s what I really wanted this film to be is that ode to the power of storytelling that you see. You see that not just around one issue like health care but the same tactic translated into the fight against the [Brett] Kavanaugh [Supreme Court] nomination,” Bruckman noted. “[For] Ady, that storytelling is not about convincing the politician—we can’t convince the politicians. But we can highlight the moral stakes and that highlighting of the moral stakes builds the people-powered movements that wins the elections and gets rid of those incumbents.”

Barkan spoke following the L.A. premiere using the computer-assisted means that substitutes for his speaking voice. He got the large crowd laughing by saying, “I think that the appropriate thing for us to do now is let’s go around the room and everyone can introduce themselves… and tell me what can be improved. Please, let’s not do that. I am joking. Can you imagine how painful that would be?”

He saluted his wife, and referenced his growing family, which includes son Carl and baby daughter Willow.

“Rachael, there are many reasons to thank you, many reasons why I love you. This is certainly not the life we expected to be living, but every day you are making it work for us and we have two incredible kids to show for it,” Barkan said. “Our lives are so rich. Thank you for making them so. And thank you also for allowing Nick Bruckman and Amanda Roddy to make this film about us. They definitely invaded our privacy and we all know you are definitely a more private person than I am. Nick and Amanda, thank you for this incredible gift. I will cherish it for the rest of my life… [Carl] and Willow will be so grateful that you chose to spend these precious years with our family.” 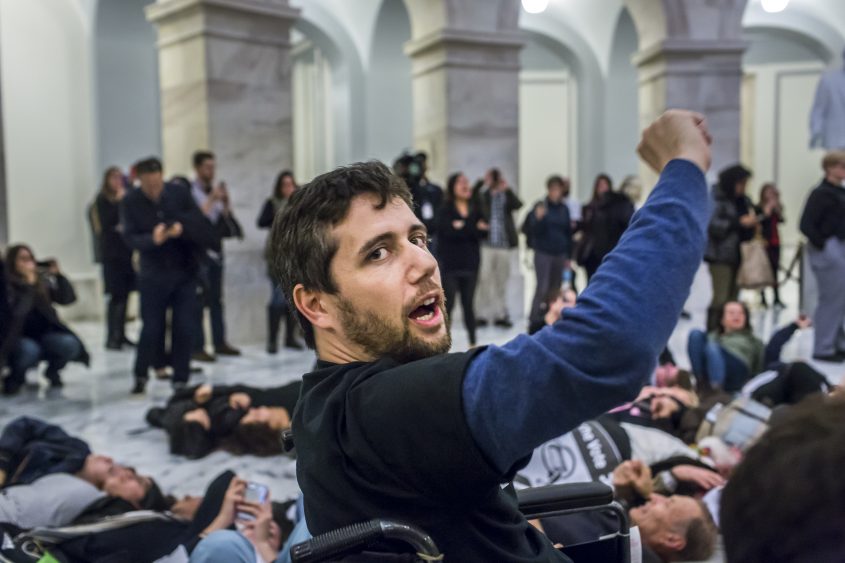 Not Going Quietly will be released on digital platforms on October 5, including iTunes and Amazon Prime. It’s tempting, and justified, to speak of Barkan as an inspirational figure. But as another young man with ALS says in the film, being called “an inspiration” is patronizing. Roddy found a different way to express her admiration.

“He did a really incredible job putting his body and his life on the line in order to fight for this country and watching that and being able to bear witness to that was one of the greatest privileges that either of us [she and Bruckman] has ever had,” she said. “You think, if he can do it, anyone can do it. Anyone can do something and that it really is a matter of life or death for so many people and we all have to commit something in order to fight for our democracy. We really can’t be bystanders.”