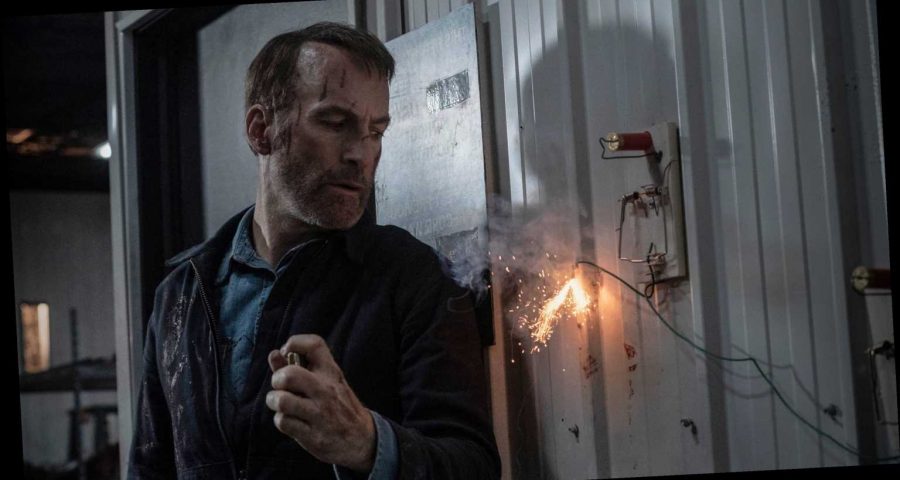 Liam Neeson and Denzel Washington can break bones and shoot bullets with the best of them. Now add, yes, Bob Odenkirk to the list of watchable middle-aged action heroes.

He’s definitely in good hands: With the new action thriller “Nobody” (★★½ out of four; rated R; in theaters Friday), members of the “John Wick” team – including writer Derek Kolstad and producer David Leitch – turn the Emmy-nominated “Better Call Saul” star into a bona fide bruiser. Odenkirk also gets to utilize his comedic skills amid scenes that slightly spoof the Keanu Reeves hitman franchise, though “Nobody” lacks needed depth and originality.

Hutch Mansell (Odenkirk) is a suburban working dad and quiet pushover of a guy living a staid life with his wife (Connie Nielsen) and kids – the most conflict he has on a regular basis is missing the garbage man every Tuesday.

Hutch Mansell (Bob Odenkirk) hangs up a thug (Alain Moussi) on the bus in the action thriller "Nobody." (Photo: UNIVERSAL PICTURES)

One night, a pair of armed robbers break into their house and instead of braining one with a golf club when he has the chance, Hutch lets them go to keep the bloodshed to a minimum. His decision is mocked and questioned by friends and loved ones alike afterward, but when Hutch finds out they stole something they shouldn’t have, he goes out for some late-night justice.

You see, Hutch isn’t exactly the nobody everyone thinks he is, and one act of retribution causes a domino effect that thrusts him back into the ultra-violent life he left behind. He also runs afoul of a sociopathic Slavic showboat (Aleksei Serebryakov) keeping tabs on a load of Russian mob money. It’s all explosions, carnage and death from there, with a hard-to kill Hutch trudging through it all.

The complicated everyman that Odenkirk’s perfected on “Saul” and “Breaking Bad” nicely carries over into his role as Hutch. No, we don’t expect him to have those Wick-ian skills but what it makes “Nobody” refreshing are the grim scenes with a hint of goofiness: For example, Hutch puts a gun to a bad guy’s head and it’s utterly delightful to hear Odenkirk scream, “Give me the (expletive) kitty-cat bracelet!” The film finds a great groove early balancing that dichotomy, though it grows a little too serious and loses some of its spark as stakes get higher for Hutch.

Action-movie lovers get plenty to love, from an appearance from 1980s tough-guy actor Michael Ironside to well-crafted two-fisted affairs. Director Ilya Naishuller, who unleashed the wildly innovative first-person sci-fi thriller “Hardcore Henry” six years ago, pits Odenkirk in bloody battle vs. Russian villains on a bus and in a booby-trapped manufacturing plant. One of the best sequences, though, is more old school: an exciting car chase with Hutch speeding down the street in a 1972 Dodge Challenger and Pat Benatar’s “Heartbreaker” as rockin’ driving music.

“Nobody” fails to break a bunch of new ground transforming another normal guy into a murder machine although Odenkirk’s presence does give the film a conflicted and darkly comic center. Let’s hope more machine-gun antics are in his future.