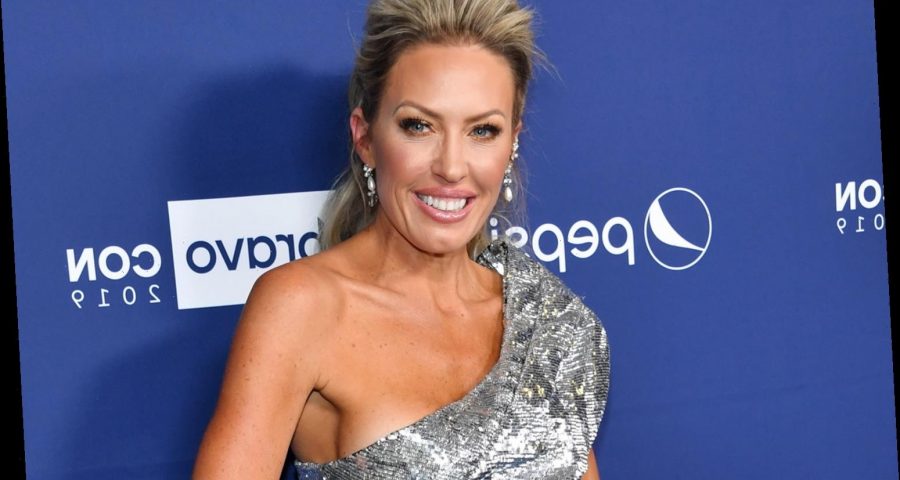 Braunwyn Windham-Burke is celebrating one year of sobriety.

On Saturday, the Real Housewives of Orange County star, 43, commemorated her first year of sobriety since revealing she is an alcoholic. The mother of seven marked the anniversary with an Instagram photo that featured herself and husband Sean Burke celebrating on the beach.

In the photo, Windham-Burke posed beside her husband of over 20 years on the beach while wearing a fancy dress. The couple also had a chocolate cake for the celebration.

"No one ever said it would be easy, but thank you @seanwindhamburke for making it easier. Officially #1YearSober… as always, one day at a time #onedayatatime 💫💕#oneyearsober," the Bravo star captioned the post.

Windham-Burke received supportive comments on her post from her followers, including fellow Housewives Margaret Josephs , D'Andra Simmons and Jen Shah.

Burke, 47, also shared a photo from the couple's beach outing on Instagram and congrulated his wife on her sobriety. "It's been a year, and you made it…. sober. So happy we are where we are today! @[email protected]," he wrote.

Windham-Burke revealed that she is an alcoholic during the season 15 premiere of RHOC and has been open about her journey to sobriety since. In October, she told Glamour that the idea of being sober "scared" her for a while.

"I was scared I wouldn't be fun anymore, that my life was going to be boring. I really thought alcohol made life enjoyable, and that's sad," she said.

However, Windham-Burke said she realized she can live her life without alcohol. "Nine months later, I realize that's not true. Honestly, I dance even more now because I can stay awake. I sometimes used to pass out at, like, 7 p.m. because I had been drinking all day. So yeah, I actually have way more fun now," she told the magazine at the time.

Windham-Burke did not receive full support from all her RHOC costars since revealing she is an alcoholic as seen in the Bravo series' two-part reunion special that recently aired. During the taping, costar Kelly Dodd accused Windham-Burke of being a "liar" and a "fake alcoholic."

Windham-Burke vehemently pushed back against Dodd's accusations and explained that she is an "addict" who can "get addicted to shopping … sex … alcohol … social media … fame." The latest season of RHOC also explored Windham-Burke's sexuality. In December, the reality star came out as a lesbian and revealed she is currently dating a woman during a candid interview with GLAAD.

During the RHOC reunion, Windham-Burke admitted to Andy Cohen that she has "never been attracted to men physically," including husband Burke, with whom she shares seven children. "It breaks my heart to say that," she said, as Burke added that it "absolutely" hurt him to hear.

Burke went on to say that it was a "relief" when his wife decided to come out.

"It really was," he added. "Because the elephant in the room is, this isn't something we can't fix. She's attracted to women." Since coming out, Windham-Burke has been open about her relationship with Burke and their difficulties adapting to her revelation. Although Windham-Burke has previously said that she and her husband currently have no plans to divorce, she also admitted that she has "no idea" if they'll stay married.

"But we'd like to and are trying to make that work in therapy," she said during a fan Q&A earlier this month, later adding that "things are calming down" and "we're finding a new normal."