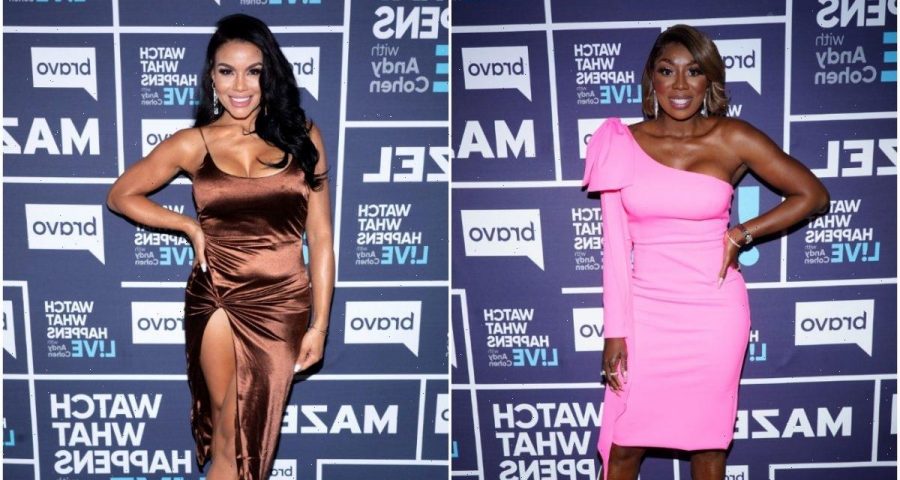 During RHOP Season 6, the castmates, and their significant others, enjoyed a Chesapeake Bay vacation orchestrated by the Osefos. Gordon Thornton, Mia’s usually reserved husband, let loose surprising many of the Housewives. Following episode 14, Wendy Osefo and Candiace Dillard addressed his flirtatious behavior, and they didn’t hold back. Osefo admitted she thinks his actions prove her insecurities in her marriage, and Dillard doesn’t believe Mia actually “enjoys” their dynamics.

The Osefos planned a vacation to the Chesapeake Bay with her castmates and their significant others during the sixth season of The Real Housewives of Potomac.

Shortly after arriving at the house, the Thorntons, Bassetts, and Osefos took shots, and Gordon quickly began to let loose. He started talking about their “open marriage” and made a few suggestive comments and movements that shocked Wendy and Candiace.

Additionally, the usually reserved businessman told his wife to “shut the f— up,” surprising some of the other Housewives who felt it wasn’t appropriate. Gordon also flirted with a few of the cast members, including Karen Huger and Ashley Darby.

While his behavior turned off some of the women, the men liked him, and he seemingly found a friend in Dillard’s husband, Chris.

Wendy Osefo thinks Mia Thornton is ‘insecure’ in her marriage

Following RHOP Season 6 Episode 14, Osefo and Dillard appeared on the after show and didn’t hold back when it came to how they felt about Gordon’s vacation behavior.

Osefo claimed she now believes Thornton “was deflecting” when the newcomer spoke about the rumors involving the political commentator’s husband. She continued, noting she thinks Thornton talks about her husband due to Gordon’s flirtatious behavior with other women. “Mind the business that pays you,” she included.

The Thorntons have opened up about their bedroom life, explaining that he’s hooked up with girls she picked out for him.

Osefo believes this is proof that Mia is “insecure” in her marriage as she doesn’t seem to have a problem with Gordon flirting with and having sex with other people in front of her. She also claimed the two don’t engage in threesomes, instead referring to it as “a consented affair.”

Dillard agreed with Osefo’s assessment, adding her belief that Gordon made the decision to include other women in their sex life.

The RHOP star continued, noting she thinks Thornton “pretends” to enjoy their dynamic, so she doesn’t feel like her marriage is falling apart.

The newest housewife defended her husband’s behavior during her segment, starting with, “Gordon is Gordon.” She also claimed he acts how he does because he knows he has a “confident wife” in Mia.

When it comes to his flirtatious behavior, she claimed she didn’t care, as long as it’s “respectful.” Finally, she pointed out his age, noting he’s “lived his life.” Therefore, she wants her husband to enjoy himself to the fullest because “life is precious.” The Real Housewives of Potomac airs Sundays at 8/7 Central on Bravo.