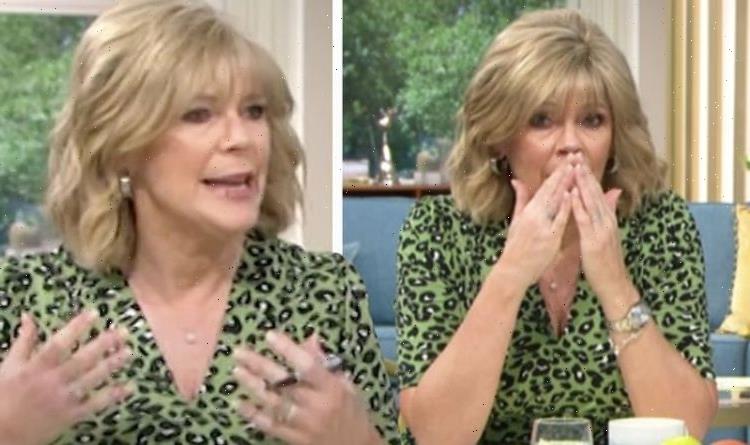 Wednesday’s This Morning opened with a terrifying video of a Utah animal trainer’s hand being trapped in an alligator’s mouth before she was dragged into his water container. Luckily, Donnie Wiseman, a guest at the reptile zoo jumped onto the alligator’s back to stop it from thrashing about. Ruth Langsford and Eamonn Holmes spoke to Donnie and his wife, who had captured it all on video about the horrifying attack and Ruth was unable to contain her emotions.

“We’ve got an amazing thing, just before we came on air, we were able to watch a video – you may have seen it as well – it has gone viral,” Eamonn began. “Its terrifying,” Ruth remarked and her husband asked: “Ruth, how scary is this?”

“It literally made me catch my breath,” Ruth said. “And made me feel quite panicky even though I know the outcome. It’s absolutely terrifying.”

Ruth explained: “It’s a child’s birthday party and they were at a petting zoo and the alligator then turned on the handler and dragged her, did the whole death role.”

“You’re going to meet a man now, here he is, his name is Donnie Wiseman and Donnie decided to jump into this enclosure,” Eamonn revealed.

The incident happened last Saturday when alligator trainer Lindsay Bull – who has has fed Darthgator the alligator hundreds of times in the past – opened his enclosure to feed him in front of guests, when he snapped at her hand.

The video showed Lindsay giving the animal the command “back” and then pushing the 150-pound reptile under his jaw when he tried to climb onto the platform.

She told CNN she thinks her hand slipped and the alligator grabbed it in a feed response.

Lindsay thought the animal would do a quick bite and release until she felt him bite down harder and trap her hand in his mouth.

“He thrashed and at that point, I realised this is going to be a serious, potentially really big injury,” she explained.

Lindsay then climbed into the enclosure and wrapped her legs around the alligator to try and move him in the water.

All of a sudden, Donnie came into view and shouted for help before scrambling into the tank and jumping onto the alligator’s back.

This Morning viewers and the presenters watched the video clip and Ruth gasped as Eamonn said: “Can’t breathe! Can’t breathe!

“All of that only happened last Saturday and Donnie the zookeeper lived to tell the tale thanks to you, with minimal injuries.

“An awful situation, but I would say to you, you didn’t have to. Why did you do that?”

Donnie explained: “I didn’t want anything to happen to that girl. I knew when he bit down on her hand we were in trouble.”

“It’s when he death rolled her,” Ruth remarked and Donnie added: “This was very serious, she was scared, I was scared.

“I have experienced reptiles in my past but no an alligator.”

Lindsay’s hand eventually got free and Donnie revealed: “She was still right with me to educate me and help me get out without any injuries.”

Theresa, Donnie’s wife who filmed the whole incident said: “I think I was just in shock because I started filming the gator being fed then when he jumped in it was like I couldn’t move, I was in shock.”

“It’s afterwards you think, what could have happened,” Ruth added.

“She [Lindsay] said just talk to me, she began to explain something then he left go thank goodness then it was just me and him at that point.”

“You’re not trained for this,” Eamonn commented. “Let’s give him a big round of applause. What you are is you are a hero and you were calm under pressure.”

“Thank you,” Donnie replied. “That was nothing I ever suspected I would do saving someone’s like from an alligator in Utah.”