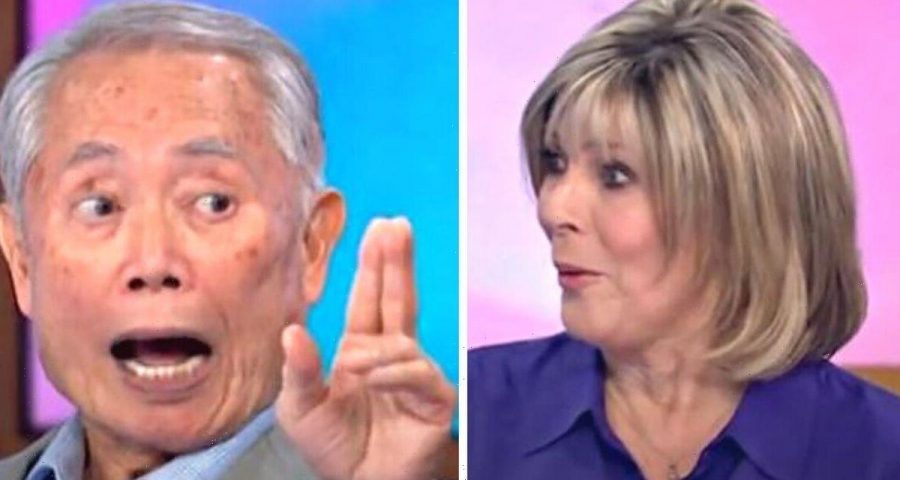 As the Loose Women panel welcomed Star Trek legend George Takei, Ruth was forced to acknowledge that she had repeatedly pronounced his name wrong earlier in the ITV show. The presenters were excited to introduce the 85-year-old actor, and as he took his seat amongst the panellists, he addressed Ruth’s blunder, explaining what the word translated to in Japanese. Ruth admitted to the blunder as the 85-year-old quipped it would “cost her”.

Throughout the show, Ruth had been excited about George’s appearance as she informed viewers he’d be joining them.

When he eventually entered the studio, the panel showed off their Star Trek skills by having a go at the hand signal.

“We’re all doing it, we’ve been practicing!” Ruth stated as she and her colleagues continued attempting the famous sign.

“I noticed you did it well, all of you,” George remarked after taking his seat.

“You will all live long and prosper. And for you [Ruth] I’m going to be very expensive, I think you know why.”

“Yes, because I said Takai, not Takei!” Ruth confessed as George explained his joke.

He remarked: “That, in Japanese, means expensive, so…”

“Oh, and I said it twice so it;’s going to cost me!” Ruth joked to the Hollywood A-lister.

“That’s right,” he responded. “But you’ve corrected yourself. I’m Takei, which doesn’t mean cheap either!”

“But listen, we are absolutely delighted to have you here,” Ruth informed George.

“I’m even more delighted to be here,” the popular actor replied.

“We’ve been called many things but not young,” Ruth laughed.

“Oh no, you are!” George insisted. “You are, from my vantage point, all four of you are youngsters.”

As the presenters explained how “amazing” he looked, the actor added: “My grandmother celebrated 104 birthdays, and I am very competitive.”

As Linda Robson asked for George’s “secret,” he replied: “Be born… to parents-“

She cut him off before he could finish, adding: “Japanese are known for having long lives though because they eat very healthily.”

“Well, my father was not, because he had a very hard life.” George went on to detail parts of his painful past as he talked about the musical he is in, Allegiance, with tells his family’s story.

“After Pearl Harbour, simply because we look like this, America was swept up by hysteria, war hysteria, and racism,” George explained.

He stated how all Japanese Americans were rounded up and forcibly removed from the States.