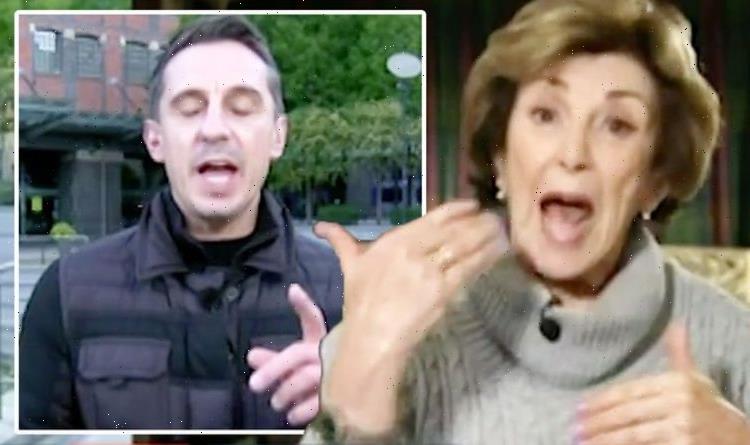 Today, the government has decided to end the uplift to universal credit implemented at the beginning of the start of the pandemic, leaving some families missing out on as much as £20 a week. Good Morning Britain’s Alastair Campbell and Susanna Reid welcomed Edwina Currie and Gary Neville onto the ITV show today to discuss the cuts, with the former claiming people should merely return to work while the latter insisted it was “brutal” to implement the cuts at this time.

Stating her case, Edwina insisted there was plenty of jobs up and down the country which those who claim universal credit should be applying for.

“What we have to realise is that we’ve got something like a million vacancies being advertised in the country, we’ve got a record number of vacancies.

“We have whole industries desperate for people to come into work, from catering to the care industry to food processing – businesses are absolutely desperate and pushing up wages.

“So it doesn’t make any kind of sense to pay people to stay home,” Edwina added but Susanna was quick to point out not everyone on universal credit is out of work.

The GMB host even read aloud account from ITV viewers who are in full-time work and on the benefit who revealed how hard the cut would hit them.

Gary soon chimed in to blast Edwina for her comments as well as the Conservative Party as a whole.

“I trust the population of this country,” Gary said. “I work on the theory that people aren’t sitting at home lazy.

“Honestly, to remove universal credit payments at this moment in time is brutal, let’s be clear,” he added.

However, as the debate edged towards its climax, Edwina and Gary found themselves talking over one another as a row ensued.