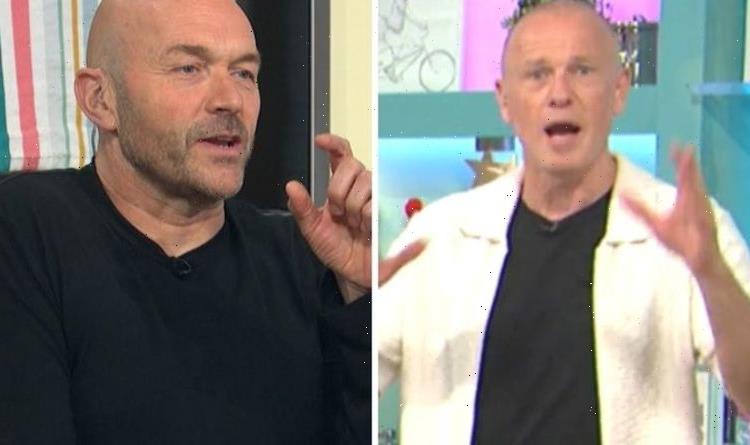 Sunday’s instalment of Sunday Brunch saw Channel 4 hosts Simon Rimmer and Tim Lovejoy welcoming guests Laurence Llewelyn-Bowen, Frankie Bridge and Jenny Éclair into the studio. The stars not only individually chatted with the presenters about their upcoming projects, but they also got to sample some of Simon’s dishes. However, towards the end of the instalment, the dynamic duo confirmed they would be taking a week’s break from the cooking programme.

Sunday Brunch usually airs every Sunday between 9.30am and 12.30pm.

But, when Simon and Tim bid farewell to viewers for another week on Sunday, they explained the show would not be on next week because of the Paralympics.

“Thank you so much for joining us today,” Tim began.

“There will be live coverage of the Paralympic Games next Sunday, so we will see you in a couple of weeks’ time.”

“But playing us out today is Jake Bugg,” the presenter added as they waved goodbye.

Live coverage of Sunday’s Tokyo Paralympics will air from 6am on Channel 4.

Paralympic Breakfast, which will be presented by Steph McGovern and Arthur Williams, will be shown by the broadcaster from 7.30am until 9.30am.

Clare Balding will then take over from 9.30am in replace of Sunday Brunch, where she will present further live coverage from Super Sunday.

Coverage of day five from the sporting event will show Chris Skelley competing in the 100kg category in judo.

Ellie Challis will also be hoping to win a gold medal in swimming.

While Sammy Kinghorn will be back on the athletics track featuring in the T53 800m final.

The Paralympic Games will begin on Tuesday, August 24, and run until Sunday, September 5.

It comes two weeks after the Tokyo Olympic Games came to an end.

The BBC programme not only saw performances from Anne-Marie, Bastille and Yungblud, but Clara and Greg spoke with some of the British Olympic team about their victories at the Tokyo Olympics 2020.

However, some viewers felt it was unfair to hold the concert without the Paralympic team there.

One penned: “Disappointed they didn’t wait until after the Paralympics to do this.”

Another raged: “Is this #TeamGBhomecoming not a little premature and unfair without the Paralympians?”

A third said: “I hope the Paralympics team will get a homecoming concert.”

“I’m confused, shouldn’t the concert happen after the Paralympics? Aren’t those athletes part of Team GB?” a fourth tweeted.

Sunday Brunch is available to watch on All4.