Don’t you hate it when Netflix doesn’t have the latest season of your favorite show? Well fans of Riverdale have had to wait an extra long time since the last season dropped on Netflix. And with season 5 just coming back to the small screen thanks to an additional hiatus, it sounds like the wait is going to be a bit longer.

When will be able to catch up with Archie and the gang as they continue to investigate the strange happenings and goings in their little town? Here’s everything you need to know about Riverdale season 5 coming to Netflix.

When is Riverdale season 5 coming to Netflix?

We have good news and bad news. The good news is that season 5 will be added on Netflix a week after the season wraps on The CW! Thanks to a deal with the YA-hitmaking channel, fans won’t have to wait too long after the season finale to find out what happened in the latest season.

But there is bad news. Unfortunately, Riverdale filming was delayed due to a COVID-related hiatus that only just came to an end. With almost half of season 5 still left to air, fans will need to wait until likely September or October 2021 for Riverdale season 5 to finish airing and join Netflix. 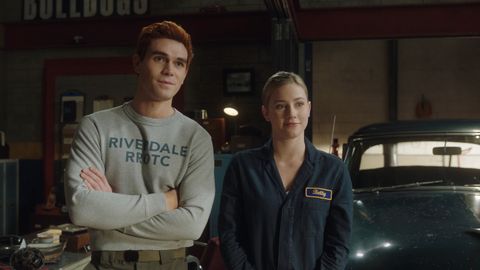 I can’t wait any longer!! Is there any way for me to watch Riverdale season 5 right now?

If you only need to catch up the most recent episodes, then you’re in luck! The last five episodes of the season are available to watch on the official CW website or The CW app.

That said, if you’re looking for the entire fifth season, then you’re going to have to wait for it to go up on Netflix or watch it in realtime.

Yes, and fans who want even more Riverdale won’t have to wait long between seasons. Riverdale is already set to return for a sixth season starting on November 16, so make sure to mark your calendars so you don’t miss it!