Darren Lynn Bousman was ready for a change. Between 2005 and 2007, he directed three sequels to the “Saw” franchise, all of which topped the box office on their opening weekends, before he turned 30. He spent the next decade parlaying that success into passion projects, like his gonzo musical “Repo! The Genetic Opera” and a Japanese horror series that he produced, but traditional filmmaking started to feel a little played out.

“I became desensitized to making movies,” he said over Zoom this month from his home in Los Angeles. “Everyone is so distracted. We live with a computer in our hands. I have a 100-inch TV but when I’m watching movies on it, I’m on my phone checking Instagram and Twitter, going to make coffee. You’re never truly present.”

During a trip to New York, Bousman visited “Sleep No More,” the dreamy, ‘30s noir variation of “Macbeth” that transforms the story into a tense interactive experience in which its masked spectators engage with actors throughout. “A lightbulb went off in my head,” he said. “For three hours, I didn’t have my cell phone and I didn’t care about anything else. I called up my agent and said, ‘This! This is what I want to do.’”

Bousman has been making the promotional rounds for “Spiral,” a quasi-sequel/reboot to the “Saw” franchise as envisioned by producer-star Chris Rock, but the filmmaker’s career was heading in a far less conventional direction before the actor called him up. Over the past decade, Bousman has become one of the leading advocates of immersive theater, otherwise known as alternative reality games, or ARGs. He has directed a series of well-received projects in Los Angeles’ burgeoning immersive scene and positioned them as a potential solution to the existential threat that more traditional storytelling faces in an increasingly fragmented media landscape.

In recent years, “Avengers: Endgame” directors Anthony and Joe Russo invested in bringing an advanced version of Bousman’s ARG projects to Las Vegas and Bousman was in talks to develop another one for Broadway when the pandemic hit. in the pipeline is a new magic-themed ARG designed to take place across multiple states. “I absolutely love Darren’s work in the immersive theater space,” said Joe Russo, an immersive theater obsessive. “It’s the gold standard of immersive for me. It’s inventive, psychologically challenging, witty yet intense.”

Bousman’s work in the field harks back to the developing “experience economy” that was taking hold across the United States prior to the pandemic. Meow Wolf, the New Mexico art collective that designed vast immersive experiences for hundreds of participants, raised $158 million in 2019. As the country eyes a return to live events in the months ahead, it’s the kind of outside-the-box storytelling that could provide a new path for studios uncertain how to develop content with lasting value. As AT&T spins off TimeWarner into an ambiguous deal with Discovery, suggesting the billions of dollars invested in film and TV projects may not be sustainable, the challenge storytellers face has never been clearer: It’s hard to get anyone to watch anything unless it caters to a vast audience with a dwindling attention span.

In a pitch video to raise financing for his first ARG, Bousman put it succinctly: “As a consumer, I’ve become lazy. As a filmmaker, I’ve become angry. I want to try to do something about that.”

Bousman has five completed ARG works to date, beginning with 2016’s “The Tension Experience,” which unfolded across nine months as participants engaged with a narrative through phone calls and online interactions; the project culminated with a two-hour immersive experience. Five years later, Bousman still speaks with childlike glee about the way it played out, with participants asked to wear the same bland white jumpsuit upon arrival and surrender their phones.

“Now I have you for three hours with no cell phones in a white uniform and you have to participate,” he said. “It was amazing. This is going to sound like I’m making shit up, but in those three hours we would see adults break down, crying, laughing, having these reactions because they were forced interact with strangers. Once you experience that, it’s hard to go back to making movies.” 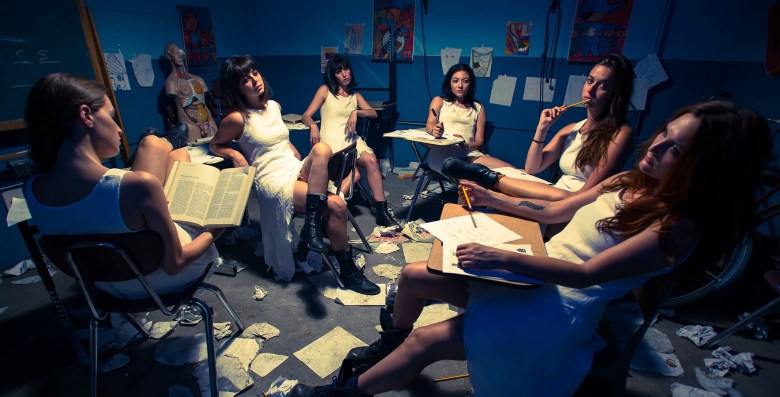 Bousman did keep directing movies, low-budget horror efforts like “Abattoir” and “St. Agatha,” but doubled down on his new obsession. “The Tension Experience” provided the first large-scale ARG in the area for audiences pining to see a “Sleep No More” type of experience in L.A.

“A lot of the L.A. stuff felt like indie film — small popups, stuff like that,” said film programmer Landon Zakheim, who has curated immersive experiences at festivals and attended several of Bousman’s live events. “He could get producers and the scale it needed, alongside the rewarding fan base that comes from the horror community. It’s multiple hours of highly produced stuff, not something cheap in someone’s apartment.”

Bousman followed “The Tension Experience” with “The Lust Experience,” an immersive cult narrative that was built out of the same world. “Theater Macabre” was a tense and shocking open-ended experience inspired by the Theatre du Grand Guignol in Paris. In 2020, he completed two pandemic-friendly ARGs, “iConfident,” an interactive story of connectivity in socially distant times built around emails and video calls, and the 90-minute online seance “One Day Die.”

Bousman said that his ARG projects are not a repudiation of more traditional film and TV. “The challenge for me is that I love filmmaking,” he said. “I’m trying to push my movies to be more immersive. But couldn’t do something like that with the ‘Saw’ movies because there’s too much riding on that. There’s a world in which movies can be immersive.”

Eventually, he wants to insert more interactive ingredients to his film productions. “I want to tell a narrative that exists outside of the narrative world of the film,” he said. “I think there’s a way to make movies immersive and combine these two loves that I have.”

It would help also help sort out the business model, since his ARGs can’t operate at the same scale as a movie released in theaters or streaming platforms. “What I do is not sustainable yet,” he said. “We’re not herding people through like cattle. It’s like ‘Westworld.’ We want you to have that personal connection to the actors and that means there’s a ceiling on what you’re able to do. You can’t put through 500 people at once.”

When his next round of ARGs hit the market, ticket prices will go up. “These are not $30 haunted house experiences,” he said. “It has to cost hundreds of dollars to make it viable.” Still, Russo’s sold on Bousman’s potential: “I think he has the right blend of showmanship and the macabre to help usher in greater adoption in the immersive space,” he said.

Solid box office for “Spiral” has led Bousman to keep the door open on the future of the “Saw” franchise, with its Rube Goldberg-like approach to horrific murders and what that might do for his other passion. “The whole thing about ‘Saw’ is playing games,” he said. “That’s what ARGs are. If ‘Spiral’ is successful, maybe Lionsgate will let me take on the reins of an immersive experience for the next one.”

In the meantime, he’s got his magic-based ARG, Arcane, to worry about. Designed to unfold in New York, L.A. and Montreal at the same time, he described it as “illusion-based, hardcore dark, with all these insane magicians.” Over Zoom, he fiddled constantly with a deck of cards. “Immersive theater forces the audience to be present, to pay attention, and become part of the story,” he said. “We don’t fuck around.”

“Spiral” is now in theaters from Lionsgate.