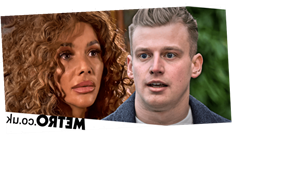 Goldie McQueen (Chelsee Healey) finds herself in danger in Hollyoaks, as Seth Costello (Miles Higson) desperately tries to flee with the blackmail money.

Viewers will know that Seth was in cahoots with granddad Silas Blissett (Jeff Rawle), who recently terrorised the McQueen clan in a vengeful blackmail plot.

The scheme resulted in the killer extorting thousands upon thousands from the family in question, and he did so with Seth’s assistance, who manipulated Theresa (Jorgie Porter) into being his mole.

Theresa was devastated when she discovered that Seth had been working with Silas, and ultimately, it became clear that the two couldn’t have a future together.

However, Seth returns in the coming episodes, and he asks Theresa to come with him.

Theresa wants to know where he’s keeping the blackmail money. Seth ultimately gives her one of two keys to a safety deposit box.

However, a hand-bag mix up results in the key ending up in Goldie’s possession, and a desperate Seth shows his true colours, as he does whatever it takes to fix Theresa’s mess.

Will Seth perhaps kill Goldie to get his hands on the key once again?