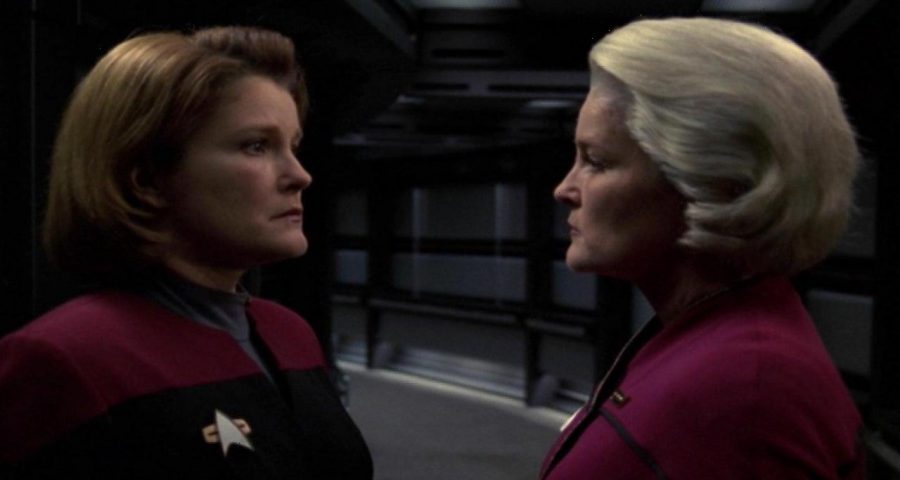 Star Trek: Voyagerended 20 years ago, which made it the franchise’s third consecutive series to run for seven seasons, following The Next Generation and Deep Space Nine. When the show came to a close, it marked the beginning of the end for a special era in Gene Roddenberry’s universe, which had flourished with the one-hour sci-fi dramas led by Captain Picard (Patrick Stewart) and Captain Sisko (Avery Brooks). Upon its debut in 1995, Voyager’s mission was to continue this success by introducing Captain Kathyrn Janeway (Kate Mulgrew), Star Trek’s first series with a female lead actor.

When ET chatted with the cast of Voyager on set in 2001 amid filming the series finale, ‘Endgame,’ the ensemble revealed they were experiencing many of the same feelings behind the scenes as their counterparts on board the show’s Intrepid class starship. “We’ve had a couple days that were a little bittersweet,” Jeri Ryan, who stepped into the role of Seven of Nine at the start of Voyager’s fourth season, told ET. “I’ve been with these people for four years and they’ve been together for seven. And you really do become like a family, because you see them more than your family.”

After having been stranded thousands of lightyears away from the Alpha quadrant, the ship’s crew of Starfleet officers and Maquis rebels had successfully banded together while they endured a bombardment of deadly obstacles throughout the journey home. And now, the time had come for actors and characters alike to bid farewell. 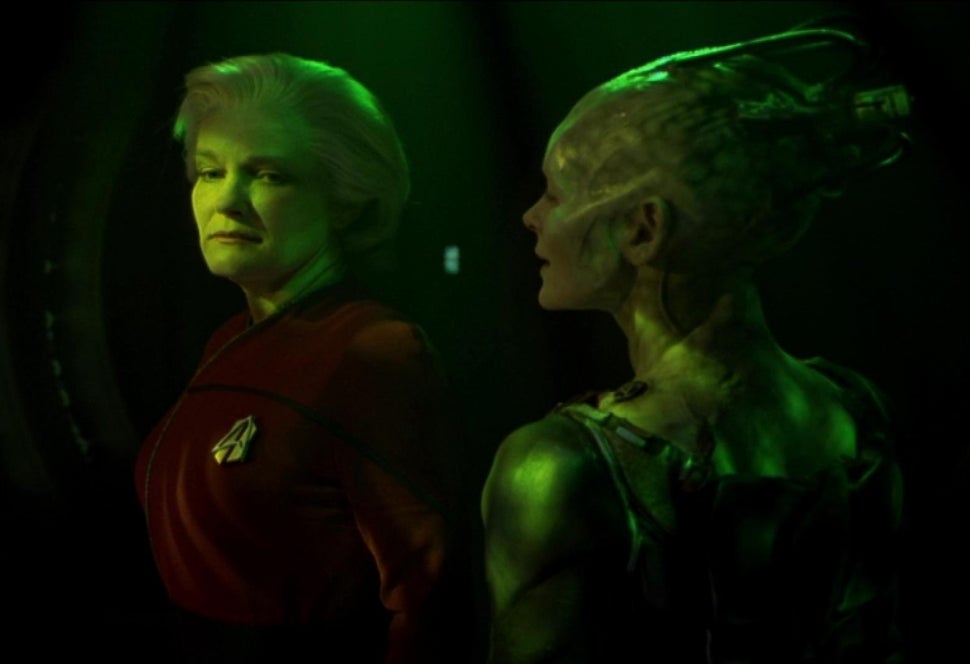 CHAOS ON THE BRIDGE

For seven years, the Voyager cast enjoyed a prime spot within an iconic pop culture franchise, one that also boasted an unprecedented fan movement that stretched across the globe. As they taped the show’s final moments, there was plenty of uncertainty at what the next chapter of their lives would look like in and outside of the Star Trek phenomenon. Ryan described the mood on set as “uncontrolled chaos.” For Voyager’s lead star, it was a fascinating experience to witness first-hand.

“It’s intriguing to me to watch this process,” Mulgrew told ET on set. She believed the entire cast was exhibiting the first of many emotional stages in a collective grieving process that would unfold over the coming weeks. “The first will be levity. Almost revelry.” “Acting out” and “lunacy” were some of her other predictions. “Because we do everything to avoid the sadness. We do everything in nature to argue against that.”

“It’s like we’ve been out of show business [for seven years,]” Robert Duncan McNeill, who played cocky pilot Tom Paris, told ET. In the heyday of network television’s enormous episode orders (by today’s standards), he noted that Voyager’s intense shooting schedule had left them without a standard hiatus break year after year. Filming between 24 to 26 full-hours of TV across each of its seven seasons meant they had practically been living on the Paramount Studios lot, with the occasional short drive to Griffith Park for location shoots. “And now we’re coming back to the real world.”

“I’m not gonna miss this uniform,” Robert Beltran, who played Maquis rebel leader Chakotay, told ET. He followed this up by lifting his arms and demonstrating the costume’s limited range of motion. McNeill echoed Beltran’s comments. He said while the clothes are “plain and nondescript” and look “harmless,” audiences might not realize they’re also fitted to the actor, preventing even the most basic of bodily positions. “Crossing your legs is not that easy in these suits.”

“I won’t miss the corset,” Ryan said with a laugh, referencing Seven’s trademark skintight clothes. When she reprised the role for Star Trek: Picard, the character’s look received a rugged style fashion upgrade. When speaking with ET in the lead up to Picard’s debut, Ryan referred to Seven’s former wardrobe as “the cat suit,” a nod to Michelle Pfeiffer’s costume in Batman Returns. 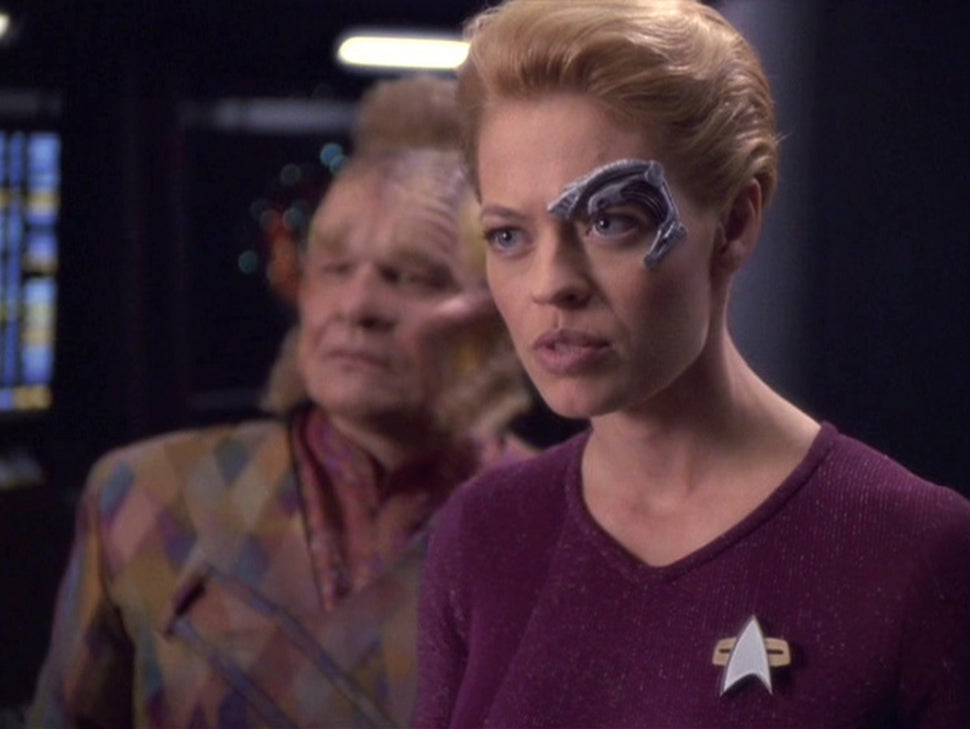 Yet, amid these admissions of what they won’t miss about the job, a sense of melancholy couldn’t be avoided. It was not business as usual on set.

“The fact that they’re knocking the sets down as we’re finishing with them is giving us the idea that this is the last episode,” Robert Picardo told ET. (Yes, there were three ‘Robert’s in this cast.) Before playing The Doctor, the ship’s medical hologram, Picardo was also a doctor across all three seasons of China Beach. The veteran actor gestured to a section of the set that had already been removed. He admitted, “It’s kinda sad to see it all falling away around you.”

Voyager began with a promise. Despite all the odds stacked against them, Captain Janeway would, eventually, bring everyone home. With this objective hanging over every storyline and each season-long story arc, any creative direction for the show’s end ran the risk of coming off as anticlimactic. But Mulgrew was confident in how they would be saying goodbye. 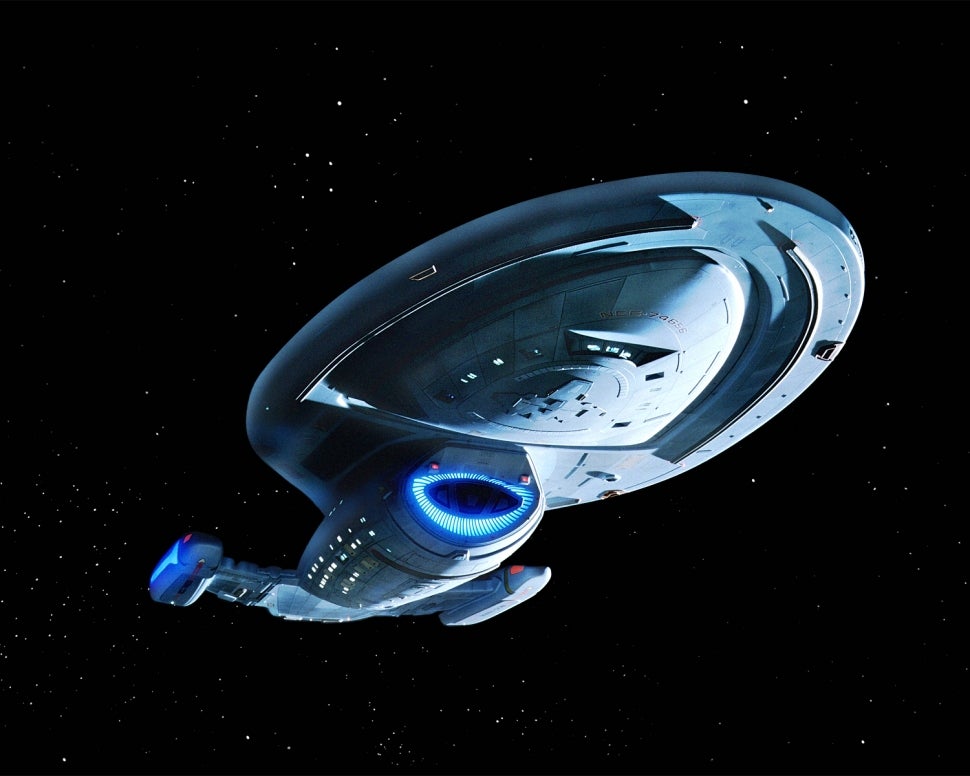 “I feel pretty good about [the series finale.] I just finished reading part two,” said Mulgrew. “I think they did a wonderful job tying it up. Very unexpected. Very unpredictable.” The contents of Voyager’s two-hour send off received additional security measures on set, which were already considerable throughout the show’s run.

“I don’t know how it’s gonna end,” said Ryan. “They’re sending home scripts under armed guard practically.” Among the many benefits of being captain, apparently, was having access to the entire top secret script. As they were already in the midst of filming part one of the two-hour episode when chatting with ET, the cast still had a pretty good idea how the journey would end, even if they didn’t have the whole map just yet. Picardo joked, “I’m looking around under coats and hats around set trying to find someone with the second half.”

According to Ryan, these precautions extended to everyone behind the camera. She said, “[The crew] had no idea what was going on in the scenes that we were shooting [this morning.] They were shocked.”

“I think the audience will tune in thinking, ‘I’ve got this pretty well figured out.’ It’ll be a game for most of them. They’ve calculated the odds against this. ‘What’s going to happen to so and so?’ And I think they will find themselves unsettled by what, in fact, the writers have come up with,” said Mulgrew. “Which is profoundly clever and very moving.”

The first half of “Endgame” tracked two versions of the Voyager crew, one in the show’s current time and the other 26 years in the future. In the latter, we learn our main characters have long since returned from their journey. But not everyone came back alive or without residual scars. Seven was killed in battle. Chakotay later died, which was hinted at being as a result of grief from her death. And Tuvok’s (Tim Russ) illness, which required treatment starting years before Voyager eventually returned, had taken a heavy toll. Janeway, now a Starfleet admiral, decided to ignore Temporal Prime Directive guidelines and travel back in time to help her crew fast track their return to the Alpha quadrant. 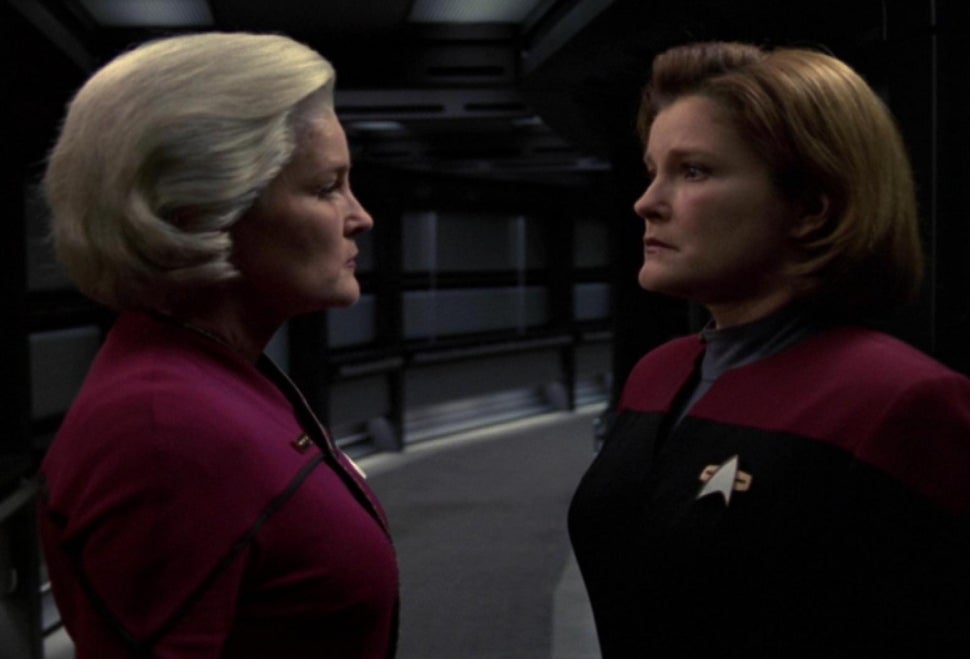 To accomplish this, Admiral Janeway traveled back in time to find Voyager and teamed up with her past self. But the Janeways are faced with two (seemingly) mutually exclusive objectives: sneaking Voyager into a transwarp corridor that would drop them on Earth’s doorstep, or destroying the central hub of the Borg empire. In a display of her trademark determination, Captain Janeway posits: “There’s got to be a way to have our cake and eat it, too.” Voyager’s producers seemed to be after the same goal with ‘Endgame.’ While our central timeline ends and fades to black just as Voyager reaches Earth, and the show’s ultimate promise fulfilled, fans were still provided a glimpse of seeing what the characters’ future might resemble. Following The Next Generation’s finale, which similarly showed trajectories for their core characters decades into the future, it was a tried and true storytelling approach in the franchise. Voyager’s finale got to live in the moment and offer potential hints at what the future could bring for these characters.

“The end of the show is very much what I, personally, wanted the show to be at the end,” said McNeill. He praised the finale’s absence of “reunion” and full circle moments with their characters back on Earth. “It’s really about our cast and our crew. And their relationships. And what they’ve brought back from the seven years journey. The connections that they have. The lessons that they learned that they’ll never forget.”

Having read ahead of the class, Mulgrew told ET that the script had left her dreading shooting the final scene. “That will be a diabolical day for me. If I get through that, then I’m stronger than I think I am.”

“I think it’ll truly hit me on the day that the new show premieres,” Garrett Wang told ET on set of the finale, who played Ensign Harry Kim, in reference to Star Trek: Enterprise’s impending debut that fall. “Because then we are no longer the new kids on the block.” In a sense, the end of Voyager wrapped up a section of the Star Trek timeline that had become beloved by new generations of fans. Enterprise would take Trek back to the 22nd century, leaving few ties to the characters and events from this era.

At Voyager’s finale party in April 2001, Mulgrew reflected on the impact Janeway had following her introduction six years and 70,000 lightyears ago. “I think it was bold,” Mulgrew told ET. “And I think that they made a timely and rather political move. A gesture that certainly I will never forget and I think [will culturally] serve as a great motivator for women.” 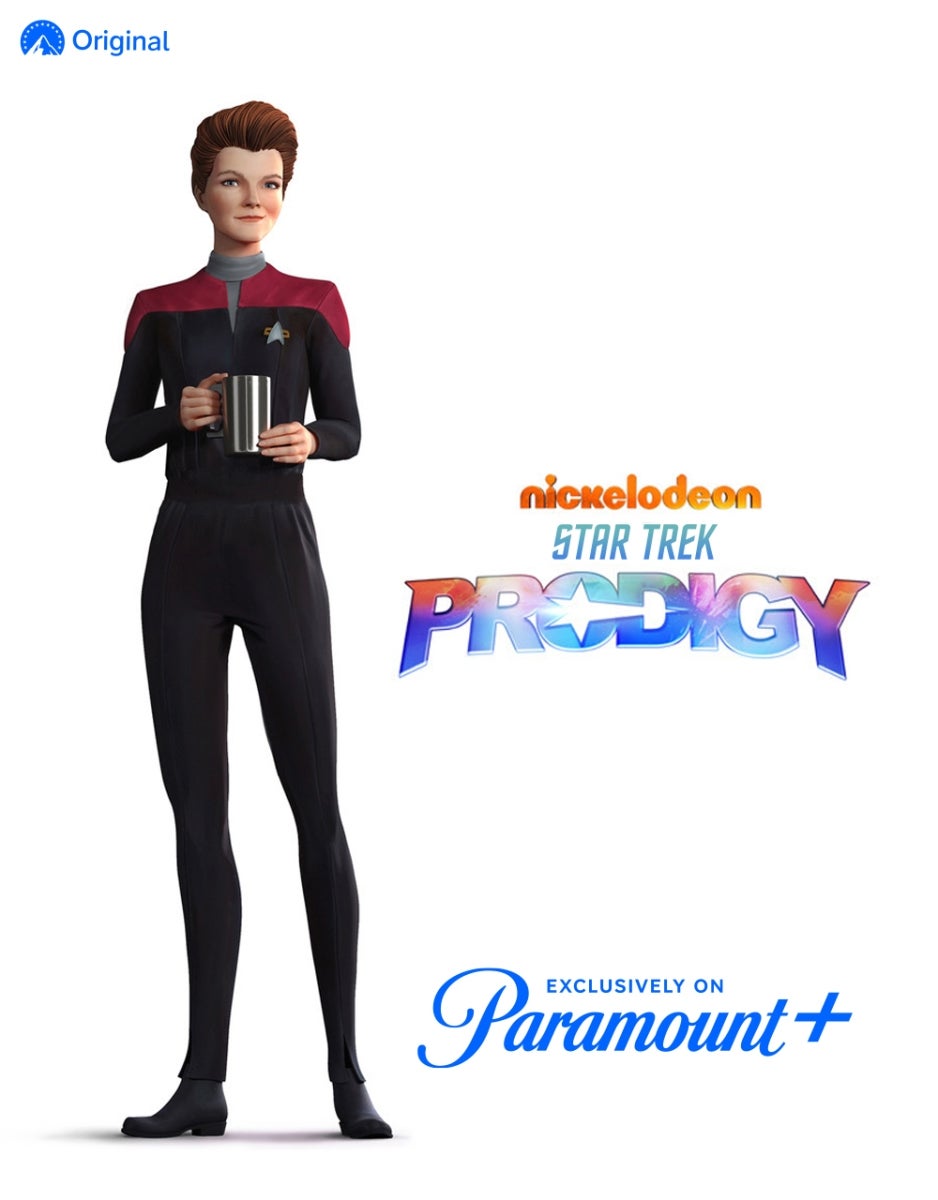 While the legacy of Captain Janeway has endured for two decades now, her journey continues. Mulgrew reprised the role for Star Trek: Prodigy, debuting on Paramount+ later this year. Taking place after the events of Voyager, the animated series follows a group of lawless teens who discover a derelict Starfleet ship, with Janeway appearing as the starship’s built-in emergency training hologram.

“Captain Janeway was held to a different standard than her predecessors. She was asked to embody an inhuman level of perfection in order to be accepted as ‘good enough’ by the doubters, but showed them all what it means to be truly outstanding. We can think of no better captain to inspire the next generation of dreamers on Nickelodeon, than she,” Star Trek executive producer Alex Kurtzman said when the series was announced in October.

“I have invested every scintilla of my being in Captain Janeway, and I can’t wait to endow her with nuance that I never did before in Star Trek: Prodigy,” Mulgrew said in a statement. “How thrilling to be able to introduce to these young minds an idea that has elevated the world for decades. To be at the helm again is going to be deeply gratifying in a new way for me.”

ET and Paramount+ are both subsidiaries of ViacomCBS.

Watch ET’s first visit to the set of Star Trek: Voyager below.