Steph McGovern’s brand new lunchtime show kicked off earlier this week, and during the rounds of promotion, she was a guest on Channel 4’s Countdown recently where she regaled Nick Hewer and Rachel Riley about a misfortune she had during a live report for BBC Breakfast.

Steph now fronts her own show; Steph’s Packed Lunch on Channel 4, but before that she spent eight years at the BBC.

She was known for her role as Business Presenter for BBC Breakfast and spoke about one memory she had when working on location.

“The thing I loved about that job on Breakfast, was just visiting lots of different businesses,” she told Countdown host Nick.

“And getting to show off lots of different places where people work. 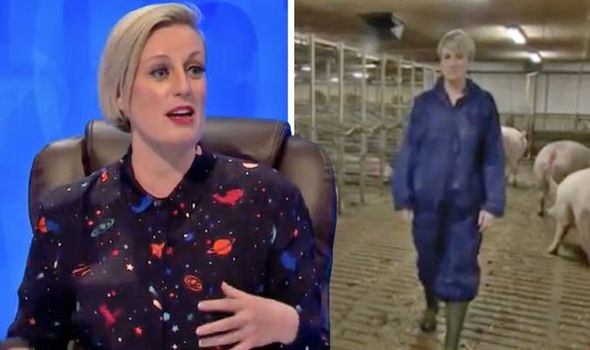 “Because I don’t think, you’ll know but, there will be a lot of people who don’t realise what we do in this country and what business is like,” Steph added.

“But that meant I was forever in hard hats, high-vis, steel-cap boots.

“But I quite enjoyed all of that.

“It was when things went wrong, obviously it was live television so that’s tricky,” Channel 4 viewers heard her say.

“I remember once, I was in a pig farm, thinking pigs are pretty cute-looking and I decided to climb in the pig pen with the pigs and put it this way, they quite like white, northern, pasty legs!

“And it was that moment when live on tele, I suddenly felt this pain in my leg, and it’s [the pigs] teeth had gone through my welly and into my leg,” Steph revealed.

“I thought ‘What can I do? I can’t kick a pig on national tele!’

“So I just had to hop around and pretend everything was fine!”

The incident is said to have taken place back in 2017 when Steph visited a pig farm in Denmark.

She was discussing the impact Brexit would have on bacon supplies in the UK and viewers saw Steph chat to the owner and some of the workers, as well as getting up close and personal with the animals themselves.

Despite being bitten by a pig, the experience hasn’t put Steph off working with animals.

During one of her Steph’s Packed Lunch shows this week, she was seen handling a chicken.

To find out details of coronavirus in your area, please fill in your postcode below.

It was said to be a therapy animal, but after one too many minutes of petting, the bird decided it had had enough.

After losing control, the host let go of the bird and dropped it whilst she tried to regain her composure.

She then issued viewers and the owner of the chicken an apology.