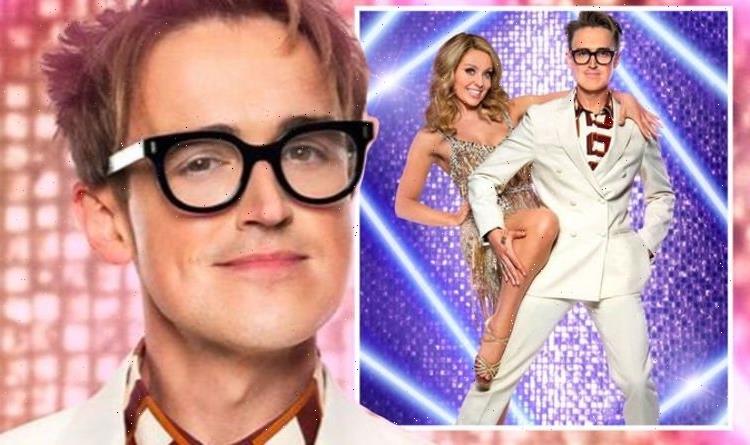 Strictly: Tom Fletcher jokes that 'he is the teacher'

Tom is the second member of the boyband McFly to sign up for Strictly Come Dancing, following in the footsteps of the former winner of the show, Harry Judd. The singer turned author has been partnered with Amy Dowden for this year’s edition of the BBC competition and has so far impressed the judges and viewers watching at home. However, it seems his fellow band member and The Voice Kids coach, Danny Jones, wouldn’t be too keen on becoming a contestant in the future.

Danny is the only member of the boyband to have never taken part in a reality television competition as his other three band members have.

With Tom and Harry showcasing their skills on the dance floor, Dougie Poynter was a contestant on I’m A Celebrity…Get Me Out Of Here! in 2011.

Just like the drummer of the band, Harry, he managed to secure victory as he was crowned King of the Jungle a decade ago.

As Tom looks set to reach the final of the celebrity dancing contest, McFly fans are looking to Danny to see if he could be next to take part and seek votes from the viewing public.

However, speaking exclusively to Express.co.uk, the singer has assured his followers they won’t see him on the dance floor anytime soon.

Danny said: “I don’t think so. Harry’s been on there, Tom’s doing his thing. They would have to pay me big bucks [to do it].”

With the singer airing on the side of caution, it seems it is very unlikely McFly fans will see him taking part in the future.

But for now, they can still follow Tom’s journey on the show and it seems he and Amy are on course to lift the Glitterball Trophy.

The pair continue to dominate the leaderboard as they have recently been getting some of the best scores from the judges.

Last weekend, they scored a respectful 30 for their Viennese Waltz routine to the song Its but the Goo Goo Dolls.

I don’t think so

It was some of the harshest critiques the couple have received from the panel and they sat just below the couple who ended up leaving.

After eight weeks of stern competition, it was Dragons’ Den star Sara Davies who ended up leaving alongside Aljaž Škorjanec.

The McFly star and his professional partner will be hoping to get higher scores this weekend as they try to crack Musicals Week.

Tom and Amy will be taking on a Couple’s Choice routine to the soundtrack on Les Miserables on the day the celebrities should have been taking to the Blackpool Tower ballroom.

The dance has a particular place in Tom’s heart as he auditioned to play a character on the West End over a decade ago.

Taking to Instagram earlier this week, he posted a picture of himself and Amy in rehearsals for the highly emotive performance.

The singer wrote in view of his followers: “I am loving musical’s week so much, it is so fun. The dance we are doing to On My Own [from Les Misérables].

“Obviously I think those of you who have followed me for a while probably know the reason why I’m doing it but I will not say too much.

“But it’s a song that means a lot to me and my family, so it’s very emotional. And the dance insane,” he concluded.

According to the bookmakers, Tom is one of the favourites to take the crown as he currently sits in the fourth position.

Coral bookmakers had the singer at 18/1 to win the title of champion and take home the Glitterball Trophy last weekend.

Edging just ahead of him were the likes of John Whaite at 13/2, AJ Odudu at 5/1 and EastEnders actress Rose Ayling Ellis leading the at 4/11.

Spokesperson Harry Aitkenhead said: “Rose is the huge favourite to go on and win this series of Strictly Come Dancing, odds on to lift the Glitterball Trophy this winter.”

However, there are still four weeks of the competition left so will Tom defy the odds and come out as top as he wins this year’s series?

Strictly Come Dancing continues tonight at 6:35pm on BBC One.