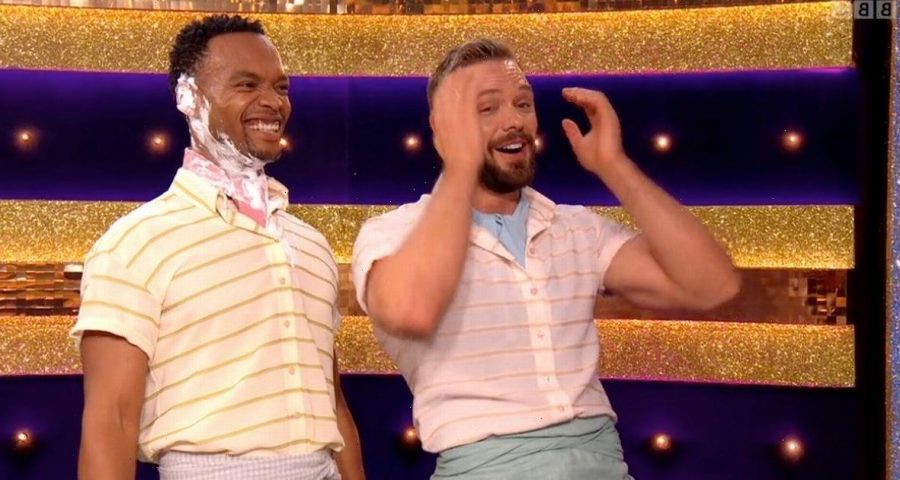 Strictly Come Dancing fans were left in hysterics on Saturday night after John Whaite's friend made a cheeky remark live on air after his Charleston with Johannes Radebe.

During the latest instalment on Saturday night, John, 32, and Johannes, 34, who are the show's first-ever all-male same sex couple, topped the leaderboard with their incredible routine to Milord by Édith Piaf.

And after the judges' feedback, John was surprised with a live video message from his friends at his local pub, who have had a TV screen fitted just to watch him on Strictly.

Speaking to his close pal and former dinner lady, Shirley, John was left speechless as she made a cheeky remark.

To which John put his hands over his mouth in shock as Shirley quickly added: "With the sweat! You are the dream team guys, you're going to win this!"

One person said that it was the "highlight of tonight's show" while a different account joked that they "can't stop laughing".

During the judges' feedback, John and Johannes' dance was called "flawless", "amazing" and even likened to a Broadway performance.

The duo scored an incredible two 9s and two 10s, giving them a total of 38 out of 40 points and topping the leaderboard.

It comes after John and Johannes were left in tears earlier this month as they topped the leaderboard once again with 39 points after receiving three 10s.

The Great British Bake Off winner and pro delivered an incredible Paso Doble to He's A Pirate from Pirates Of The Caribbean during Movie Week.

Strictly Come Dancing continues on Saturday with the results show airing on Sunday on BBC One.

For all the latest news from Strictly and the other biggest shows on the box, sign up to OK! newsletters here.