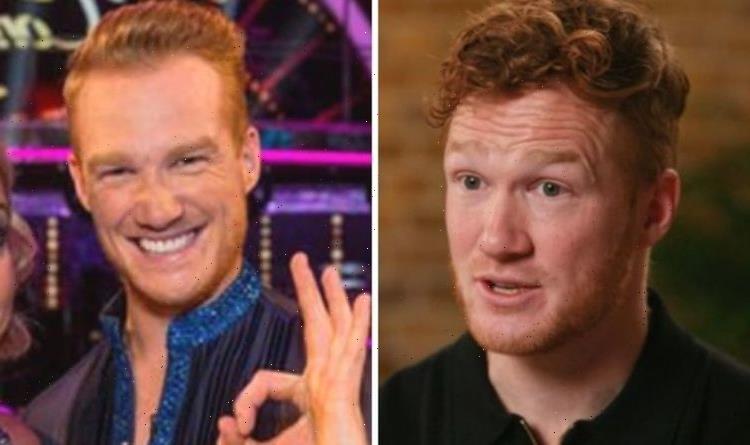 On Friday night, the three remaining celebrities battled it out in the kitchen in a bid to impress judges John Torode and Gregg Wallace. Love Island star Kem Cetinay, Paralympian Kadeena Cox and journalist Gavin Esler had to make two courses in the hopes of making it to the semi-final. Each contestant had to make a main course and a dessert of their choice, which would then be sampled by their guest judges.

Gregg and John began by explaining to the celebrities they had invited two champions and a Celebrity Masterchef finalist to sample their cooking.

Rylan Clark-Neal, Greg Rutherford and Lisa Faulkner were back at the Celebrity Masterchef kitchen, although, this time to sample the contestant’s cooking.

Introducing the show, John began: “Congratulations you three, and welcome to your quarter-final.

“You have got to battle it out as we have two semi-final places to give.”

“To help us make this big decision,” he continued. “We have invited three very special guests.

“Two champions and a finalist of Celebrity Masterchef.

“Two courses, one hour and 15 minutes. Sadly, one of you is leaving the competition.”

As the celebrities got work in the kitchen, viewers got a first glimpse of the guest judges as they took their seats at the table.

However, it didn’t take long before BBC viewers got distracted by Greg’s new hairstyle.

The athlete, who usually wears his hair short and straight, decided to go for a new look.

Many viewers took to social media to share their thoughts on Greg’s new curly hairdo.

“In love with Greg Rutherford’s hair,” one penned.

A fourth baffled viewer asked: “What have you done with your hair, Greg?”

“Try not to stress as that kitchen can really just turn the screw and cause of levels of anxiety-like no tomorrow. So, just keep your cool.”

As each of the celebs served up their dishes, some ended up doing far better than others.

Poor Gavin ended up serving up raw scallops and it didn’t go down very well with the guest judges.

In the end, it was his undercooked fish that led to Gregg and John sending Gavin home.

Celebrity Masterchef returns on Monday at 9pm on BBC One.