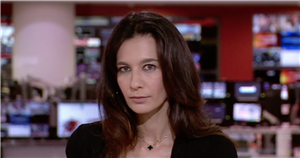 This is the moment a Taliban spokesperson called a BBC presenter as she was giving a live report on their invasion of Afghanistan.

Yalda Hakim was reporting on how the country’s capital Kabul had fallen to the rebel group when their spokesperson Suhail Shaheen phoned her up directly.

It led to a mad scramble as the news anchor physically held the phone up to the microphones in the hope of broadcasting the impromptu interview for viewers.

She asked: "Mr Shaheen can you hear me?" A faint “yes” was heard before Yalda continued: "OK we've just got you on the phone so we're just going to see if we can put you on speaker. Can our viewers hear that? Can you speak sir, can you just introduce yourself?"

The presenter looked to producers to check the microphone was picking up the sound, before looking directly into the camera to ask: "Is that fine? Can our viewers hear that?"

During the interview, Mr Shaheen said those living in Kabul and Afghanistan should not fear Taliban rule as they “want a peaceful transfer of power”.

“Secondly, people will be able to resume their normal [lives],” he continued.

“Thirdly, there is no revenge on all those who are working with the Kabul administration or with the foreign forces.

“We want all embassies to continue their work, there will be no risk to diplomats or to anyone.

“All should continue as if they were continuing in the past.”

But despite the group's claims of "peace", there are fears the brutality of their regime in 1990 could be seen again.

Women's rights were all but non-existent when they were last in power and there have already been reports of revenge killings.

The city’s airport also descended into chaos as hundreds of people attempted to get a flight out and “gunshots” were reportedly heard on the streets.

The blistering offensive by the Taliban has come after foreign troops, including the US, were withdrawn.