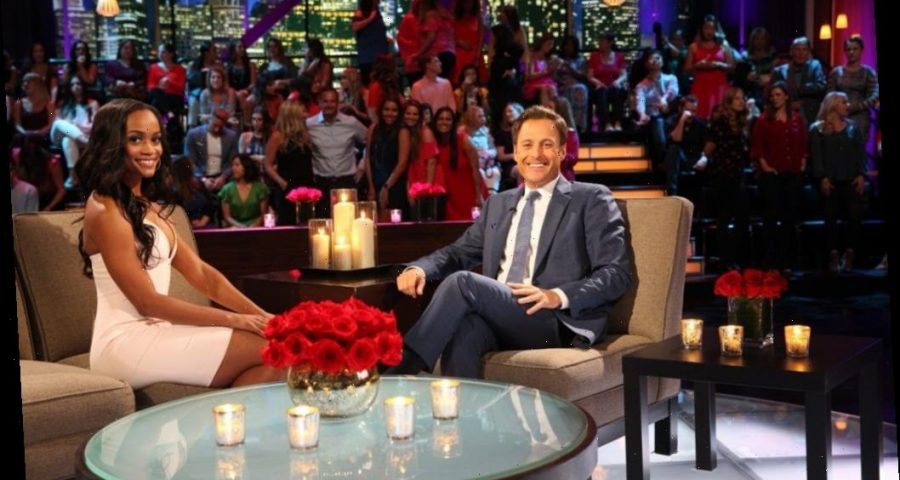 Bachelorette Rachel Lindsay had a controversial interview with Chris Harrison, which caused the television host to “step aside” from the franchise indefinitely. She is now reportedly in talks to take over Harrison’s role for After the Final Rose. Lindsay has much hosting experience. She hosts The Ringer’s Higher Learning and Bachelor Nation’s Bachelor Happy Hour. Furthermore, she hosts the entertainment news show Extra. A source revealed what is happening behind-the-scenes for The Bachelor leading up to the final episode’s production.

How the Rachel Lindsay and Chris Harrison ‘Extra’ interview went

When Lindsay had Harrison on Extra on Feb. 9, she asked him about controversial contestant Rachael Kirkconnell. The current show contestant has been in pictures wearing antebellum south clothing and accused of “brownfishing.”

Harrison defended Kirkconnell and exaggerated the time frame for her posts. He said she should speak up about her social media actions. The host also questioned Lindsay’s authority on race issues. She was the first Black bachelorette in the franchise.

The interview caused many Bachelor Nation members to speak out against Harrison and his remarks. After the interview, Kirkconnell addressed her actions in an Instagram post and apologized for her past behavior.

But Harrison’s words in his interview with Lindsay had consequences for the longstanding bachelor host.

Chris Harrison ‘stepped aside’ from the bachelor franchise as host

Following the pushback from fans and former contestants, Harrison announced on his Instagram on Feb. 13 that he would be “stepping aside” from the franchise.

“This historic season of The Bachelor should not be marred or overshadowed by my mistakes or diminished by my actions,” he posted on his account. “To that end, I have consulted with Warner Bros. and ABC and will be stepping aside for a period of time and will not join for the After the Final Rose special.”

Harrison claimed that he will use this time away from the franchise to “try to evolve and be a better man.”

But with Harrison’s announcement that he would be leaving the franchise — albeit temporarily — the question arose: Who will replace him for the remaining episode on this season?

Rachel Lindsay now might replace the host, for the first time ever

The After the Final Rose episode special is filming in LA this weekend, according to Reality Steve. And according to a source who spoke to Us Weekly, ABC offered Lindsay the hosting gig while Harrison is temporarily gone from the franchise.

“ABC and Warner Bros. have spoken to Rachel about the possibility of hosting the After the Final Rose special and they would like her to take on the role,” a source revealed to Us Weekly. “She is still weighing the options and is pushing for After the Final Rose to include a bigger conversation about race overall in the franchise. No final decision has been made yet.”

Lindsay possibly hosting the After the Final Rose special would be monumental for the former lead. She has been calling on the franchise for years to be better regarding diversity issues on-screen and off, and she would surely bring her own style and flair to conclude the season.

You can watch The Bachelor on ABC, Mondays at 8 p.m.